It seems that in today’s world, young people look more and more towards actors, singers, and other celebrities as their role models.  Though looking up to positive examples set by certain celebrities is not a bad thing, it is important for the youth to remember important figures like Nelson Mandela.  Just this past Monday, July 18th, was Mandela’s 93rd birthday as well as Nelson Mandela International Day; a day to recognize the accomplishments of the former South African president.  As a man who is 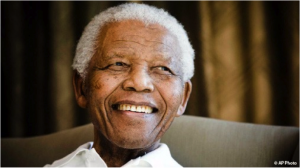 seen as a champion for human rights, justice, equality, peace, and democracy, Nelson Mandela has a lot to offer the young people of the world.

Mandela’s life story is an inspiring and moving account of how one man was able to accomplish so much for humanity.  Born in South Africa in 1918, Mandela was an anti-apartheid activist who was sentenced to life in prison for plotting to overthrow the government through the use of violence.  Despite protests and demonstrations from people across the world demanding for his freedom, Mandela spent twenty-seven years in prison.  He was released in February of 1990, and went on to lead South Africa’s first multi-racial political elections.  After winning the elections, Mandela became known as the first black president of South Africa.

Though Mandela’s political accomplishments are a well-known feat, he is also acclaimed for his charity and human rights efforts.  He has created a plethora of foundations to help promote social justice, raise awareness and prevention of AIDS/HIV, better the lives of children and young people, and creating a scholarship program for bright and promising African youth in order for them to continue with their education.  A few of Mandela’s organizations are the Nelson Mandela Foundation, 46664.com, Nelson Mandela Children’s Fund, and The Mandela Rhodes Foundation.  All of the foundations hold a deep meaning for Nelson Mandela, and he promotes young people to get involved in volunteer work and social change.

In order to commemorate and remember all of Mandela’s accomplishments, the United Nations officially deemed July 18th as Nelson Mandela International Day.  Working in tandem with the Nelson Mandela Foundation, the UN asked everyone to take 67 minutes out of their day to aid others.  The reason the number 67 was chosen is because Mandela has spent 67 years of his life servicing and helping humanity as a whole.  The Nelson Mandela International Day is a beautiful message to every person, especially young people, because it is meant to get people to think about others, take part in bettering their communities, and making this world a more humane place to be.

Nelson Mandela is an inspirational figure for everyone, but he is especially inspirational for youth.  He exemplifies all of the qualities that people strive to have, and has dedicated his life to human justice.  If young people follow even a few of Mandela’s examples, volunteer in their communities, and take the time to help others then they will have a better understanding of people in general.  Volunteering and aiding others, even children their own age, can help young people develop acceptance and tolerance, stop bullying, and bring an end to school violence.  Young people need a positive role model like Nelson Mandela, and for that reason it is important to keep his achievements and successes alive.