I love food.  No, I’m passionate about food.  Better yet, I’m obsessed with food.  So when I read or hear about something negative about the food industry, I naturally want to be one of the people that can create change, or at least do a good job of playing my role as a responsible consumer of food.  I do this because I understand the dangers of taking food for granted.  Food is not a finite source and we are living in an era where more and more food is being wasted.

Remember when your mom used to say, “Finish your peas because there are starving kids in Africa”?  Well, the global wasteful treatment of food affects a lot more than just 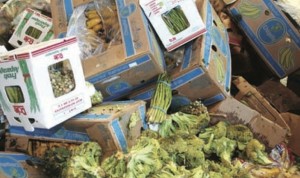 poverty standards.  There are water crises across the world and so much water is already diverted from human drinkability and used instead to water crops and feed animals.  It’s sad that in the end these foods aren’t even eaten and are instead thrown away.  It’s estimated that about 1.3 billion tons of food is lost each year, meaning that resources like water used to produce the food are also lost.  If this water could be saved, it could go towards replenishing aquifers for drinking or go towards other types of crops in developing areas that need more water sources.  Moreover, the treatment of food waste contributes to global warming as tons of decomposing food produce large amounts of carbon dioxide and methane gases.  According to a recent study, about 10% of the greenhouse gas emissions from the US come from food waste.  (For more statistics like these on food waste, please visit this site.)

So what could be improved if we cut down on food waste?  As I mentioned earlier, how we consume (or don’t consume) our food is tied to so many other issues that have global repercussions.

A major reason so much food is wasted is linked to consumer and producer attitudes.  Current quality standards are too high and don’t make sense!  People seem to place an overwhelming focus on the cosmetic appearance 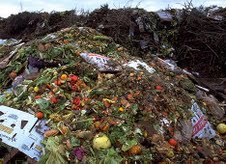 of produce, wanting only to buy the fruits and vegetables that look the prettiest and the freshest.  Stores cater to this perception by constantly replacing the produce that are on display and throwing away food that has not yet reached its sell-by date.  Similarly, farmers also cater to these ideals by tossing out any part of their harvest that looks “defected”.  For example, one farm study showed that 30% of harvested carrots were thrown away because they looked bent and not straight.  People don’t seem to care that no matter the shape or aesthetic value of a carrot, they are all still edible!  US supermarkets also routinely overstock shelves to create a look of abundance, which pleases consumers.  However, supermarkets end up throwing away several million pounds of food daily before its sell-by date.  Kitchens in schools, hospitals and restaurants also end up discarding a large portion of the food they buy.  While it would be incredibly beneficial for these supermarkets and kitchens to donate unused food, surprisingly few do.  This unwillingness to donate edible excess food is due to fear of lawsuits if the food makes recipients sick (even though they are protected by liability laws), or simply not wanting to bother with donating.

Now that the importance of changing the way food is grown, marketed and eaten is apparent, we have to do something about it!  Some major strategies include:

Because so many other issues of the world are all linked to wasting food, it’s even more important to be aware of these problems and to take action.  Even the smallest individual actions can make a difference.  So please check out more facts on food waste and what you can do about it!

Yvonne Chen is a SISGI Group Program and Research Intern.  Her focuses are in environmental sustainability, human rights issues, and economic aid in developing countries.