The food market is a difficult one. Production depends on weather and soil, prices are very volatile (they fluctuate a lot) and products are easily perishable. In spite of these difficulties, a few crops have managed to dominate the agricultural market. They have become the “king crops“ (in reference to the great documentary King Corn), the most cultivated and the most used and consumed. Crops such as soybean and corn are used in creative ways to justify their huge production.

Indeed, the crops that are most grown in the United States are corn and soybeans. Together they comprise 50% of US agricultural products (more info). Nonetheless, we 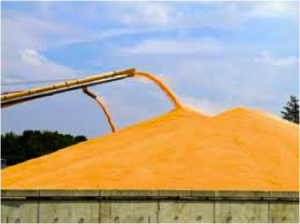 don’t eat fried corn in every meal, just as we don’t eat tofu everyday. So why is the production of those crops so high?

There are two major reasons why the demand and the production of these crops have increased so much in the recent years, but one of the most important reason involves our food system as a whole. It is a system that has become unsustainable both for our environment and for our nutritional needs. (another problem that justify massive production of corn is the increasing demand of biofuels. To be covered in a future post).

Corn and soy are crops that we eat everyday, the only thing is that they are processed in ways that make it impossible to notice them. This happens in two ways. The corn is either used to feedlivestock or it is processed in such ways (corn syrup mainly) that make corn an important ingredient of a lot of unhealthy products

According to the National Corn Growers Association, about eighty percent of all corn grown in the U.S. is consumed by domestic and overseas livestock, poultry, and fish production. The crop is fed as ground grain, silage, high-moisture, and high-oil corn. For Soybean, it is estimated that 98%percent of the U.S crop is used for livestock feed (see here). The problem is that cattle was not naturally designed to eat corn or soybean (and obviously fish and poultry weren’t either). It is an animal that feeds on grass. Nevertheless, agro-industrial companies have found that feeding beef with corn and soybean is cheaper and more profitable, even though the quality of the meat decreases. Indeed, feeding beef with corn makes the meat more greasy and increases the fat in the meat. It also disrupts the cow’s digestive system, therefore cattle excrements emit much more methane (the most dangerous green house gas)when they are fed with corn. I don’t think the consumption of meat is by itself the problem, not as much as how big our consumption has become. Our consumption has risen so much becasue we produce beef in such big quantities that have led to decreased prices and increased the demand. Unfortunately, feeding beef with corn is a necessary process to make meat so cheap.

It is not only the production of meat that is making our agricultural market produce only a few crops. Most of our “junk food” also needs either the oil or the starch of soy and corn, respectively. Both soybean and corn are processed to become vegetable oil and sweet corn syrup. About 12% of the U.S. corn crop ends up in foods that are either consumed directly (e.g. corn chips) or indirectly (e.g. high fructose corn syrup). Most of our cookies, ice creams, sodas, burgers, and several main cooking ingredients are high fructose corn syrup and other types of vegetable oil. The massive consumption of these unhealthy products, and therefore the massive need to produce these crops, is one of the reasons the American diet has become extremely unhealthy. Worldwide, over 2 billion people suffer of obesity related disease (such as heart disease, diabetes etc). This rate is higher than the number of individuals that suffer chronic hunger (estimated to 1 billion). This is largely due to the fact that we are feeding ourselves with a few crops and a few ingredients. As pointed out in a previous post, food security is not a problem of production as much as it is a problem of distribution.

So why is the production of these crops so high? It is not only tied to bad economics (companies that look to produce in the cheapest way and so on) but also to the legal system. The Farm Bill (which a new version is supposed to pass in 2012) largely supports farmers who grow corn and soybeans, but does not incentivize farmers to grow other types of crops, or more vegetables. Indeed, the subsidies that go into the production of corn and soybeans are huge (see here). Therefore the industries that lobby to protect this bill (such as the National Corn Association) are very powerful, and they neglect the opinions of every-day Americans that are concerned about the interests of citizen’s health. These opinions have never had a chance to change what we grow and how we feed ourselves. Nevertheless, we should have a right  and be guaranteed that what we produce is healthy for everyone!

In order to solve this, I think we could easily allocate our land resources better. Instead of growing so much corn to feed cows, we could grow more wheat to feed people or more vegetables to have a healthier diet.  By diversifying our agricultural production, we could feed ourselves in a healthier manner and in one that impacts our environment differently. We have enough land and technology to produce as much as we want. But we should choose wisely what we produce.