Gender inequality is a deplorable reality that runs rampant across the globe.  Women are vulnerable to injustice at home, work and in their communities.  Socially, economically, politically and culturally, women have been treated as second class citizens throughout history.  In the workplace, women earn less money on average than their male counterparts and face a lack of opportunity for moving up the corporate ladder or even securing equal access to the jobs men occupy.  In general, the wage gap between men and women is relatively large despite laws (in some parts of the world) that require employers to pay both genders equally for positions that are comparable in education, skill and responsibility.  Governmental and nongovernmental agencies, as well as human rights advocates have made significant progress in advancing the rights of women through empowerment, education and progressive legislation over the past century or so.  Nevertheless, there is still a long road ahead in obtaining total equality.

UN Women, a fairly new branch of the United Nations specifically focusing on advancing gender equality and the empowerment of women, released their first major report this week that reviews the rights of women around the world—Progress of the World’s Women: In Pursuit of Justice.  Their findings focused on several areas of injustice faced by women from domestic violence to voting and political rights to rights in the workplace.  They reported that globally, women are paid 10-30% less than men despite 117 countries adopting equal pay laws.  This figure holds true across all job sectors from low-level to high-level.  Furthermore, in one-third of the countries analyzed, women were forbidden from working in the same industries as men leaving them vulnerable to low economic opportunity and poor working conditions.  600 million women, or more than half of working women worldwide, are in unpaid, insecure, informal and/or unprotected labor jobs.  Similar facts and figures have been suggested in other studies.  In the U.S., it has been reported that a full-time working woman makes 77 cents to every dollar earned by a man, with an even wider gap when looking at minority women—African-American women earning 71 cents and Hispanic women 62 cents.

UN Women make a strong recommendation in their report for justice funding and reform to eliminate gender discrimination.  They suggest that reforming the justice system and transforming legislation will lay the foundation for improving the status of women in society.  While I agree that fair and just legal systems and laws are significant practices in changing the negative ways in which women are treated in society, I cannot help but to wonder if it will significantly alter negative attitudes towards women overall.  Even in industrialized, or developed, countries where laws and regulations are set in place regarding gender equality in the workplace, tremendous gaps between men and women exist.

The laws do not necessarily equal a change in attitude or major change in behavior.  If laws laid the groundwork, then why do women only represent 3.2% of S&P 500 CEOs in 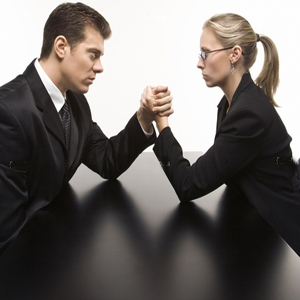 the United States?  Why do so many men (even women at times) in positions of power ostracize other women’s ability to become powerhouses as well?  Take for instance, the CEO of New Zealand’s Employers and Manufacturers Association, Alasdair Thompson, who remarked this past week that women do not get ahead in the workplace because their menstruation cycles make them less productive.  Or how about Facebook female exec Sheryl Sandberg’s recent interview in which she expressed her thoughts on the reasons for gender inequality in the workplace—women too often “blaming others” and “not taking responsibility for ourselves.”

Many studies have attributed wage gaps to traditionally-defined gender roles—women as child-bearers and caretakers and men as protectors and breadwinners.  This has created a glass-ceiling for women in the workplace that is difficult to break through.  Yet, those who do move ahead often have to sacrifice family life for work life, conforming to a stereotypical male role that does not have parenthood on the list.  Men suffer as well—expected to put work time ahead of family time.  This is where not only law-reform needs to come into play (i.e. paid maternity, paternity leave; childcare; etc.), but gender norm reform as well.  Women are not the only ones experiencing gender-conflict, men are too!  A new study reveals that men now have more work-life conflict than do women which is associated with this idea of being stuck in traditional ways of thinking in a progressive society.  The world is changing and gender norms are transforming.  Societies need to become more educated on the generational changes that continue to take place and begin to acknowledge and accept that gender roles are not the same as they once were.  What do you think is the foundation for changing societal attitudes about women (or gender roles in general)—justice reform or education and awareness building?  How can we combine the two?