Last week, I wrote a couple of posts about the security situation and aid organizations in Sudan. One element that factors heavily into both of these issues is water – that most essential of resources. Now that we’re less than a month away from southern Sudan’s secession from Sudan proper, it’s becoming obvious that resources like oil and water are going to define the prosperity of each nation. But what happens when such resources are squandered and poorly managed?

80% of people living in Sudan rely on agriculture for their livelihood. Obviously, this implies a massive reliance on water that is both plentiful and easily accessed. Sudan’s irrigation system is larger than that of any other country in Sub-Saharan Africa, but this doesn’t mean that it is well put together. The system wastes an incredible amount 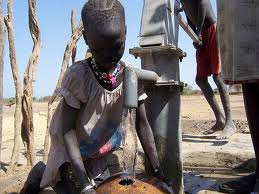 of water through poorly implemented methods of irrigation. In spite of vast water resources, such as access to the Nile River and massive swamplands, much of Sudan has extremely limited access to clean water.

Agriculture isn’t the only concern. Most aid organizations focus on the more immediate issue of providing clean drinking water. To date, Water for Sudan has drilled 104 wells in Southern Sudan. This organization was started by one of the Lost Boys of Sudan, who were displaced during Sudan’s second civil war and who have intimate knowledge of the plight people in southern Sudan are currently facing. The organization follows the principle that “the ethical and moral way to create lasting change is to respect and empower people’s capacity to transform their own lives.” This sure sounds like the mission statement of an organization that is working towards a sustainable initiative.

But I wonder if its board of directors has ever considered expanding their operation beyond simply drilling wells. After all, it doesn’t seem like the Sudanese government in Khartoum has much interest in fixing the mismanaged irrigation systems of the south, which will soon officially have to fend for itself. Water for Sudan’s yearly income hovers around $570,000 and relies on private donors. By the time you factor in operating expenses, this number seems significantly smaller. My plane ticket from Chicago to Kenya, a southeast neighbor of Sudan, just cost me nearly $2,000 – imagine funding that and other expenses for every member travelling to and from Sudan to help drill and you begin to understand the cost of doing business in such a region.

I’m not proposing that this single relatively small organization tackle the irrigation problems of an entire nation, nor am I saying that there’s anything bad or wrong about the current mission of Water for Sudan. Rather, I’m wondering what 104 well’s worth of resources and labor could do in the way of properly irrigating a small, target region and what that could do for the Sudanese living there. If people near a swamp, for example, could be provided the technical assistance to capture water from the swamp drainage and funnel that into their crops, that may allow them to access the full potential of the arid portion of their lands.

Access to water and an ample supply of crops would alleviate many of the issues that have brought Sudanese factions to war in the past and present. Considering the small budget of most of the aid organizations working in southern Sudan, it’s important to question whether or not their methods are creating the most sustainable of impacts. It might be a hard decision to redirect funds from a project that provides immediate, necessary results (drilling wells in remote villages) to a project that takes time and has a smaller guarantee of success (building/fixing irrigation), but this is still something worth considering.

Regardless, these organizations should be commended for venturing into areas where larger organizations fear to tread. Because of the dedication of groups such as Water for Sudan, thousands of Sudanese have reliable access to clean drinking water, which is certainly a step in the right direction.