Many of my posts this past month discussed the impacts and strategies of foreign aid. The more that I’ve researched projects undertaken by aid organizations, the more I’ve seen what commonly works and what doesn’t work. If we take a look at these commonalities, incorporate lessons learned from them and use them to inform current and future aid projects, perhaps we can ensure that aid resources are put to the best possible use.

As a way to demonstrate each of these points, I’ll pull examples from the foreign assistance projects that have been used to help the people of Sudan. For those unfamiliar with the issues these people face, here is a quick history that focuses on one of Sudan’s key resources: oil. Tensions between the Sudanese of the north, mostly Muslim and the south, mostly Christian, have led to decades of violence, partially stopped by the 2005 Comprehensive Peace Agreement. Earlier this year, over 98% of southern Sudanese voted to separate from northern Sudan in a landmark referendum. 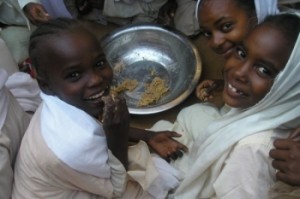 Tensions have mounted as the deadline for separation nears, leading to the establishment of a 20-kilometer demilitarized zone between the north and south. Generally speaking, the south is in a much worse economic condition than is the north.

The first point I believe to be essential to any form of foreign aid is that, in most long-term cases, aid should be directed at helping the given population establish the means to sustain itself, rather than only addressing immediate issues. Simply pumping massive amounts of monetary and/or material aid into a country is not an effective way of creating a lasting and sustainable impact.

I understand that in certain cases, immediate aid without an extensive plan is necessary, such as the relief efforts to the Japanese earthquake. But in the case of Sudan, the humanitarian crisis has been present for decades. There is no excuse here for rushing in with aid that does little but bandage a gaping wound. In spite of its vast oil reserves, southern Sudan “produces very little durable capital goods and hardly exports anything to the outside world.” Most of the infrastructure in the country to handle the oil reserves is in the north, which southern Sudan will soon not be a part of. Aid organizations should focus on helping the southern Sudanese establish infrastructure capable of extracting and transporting their oil, which would in turn enrich the lives of the population as a whole and help establish the south as a more stable nation.

The second point is that accountability is crucial – without it, who knows where all the resources are headed? Perhaps this sounds rudimentary, but it’s shocking how often accountability is slated as a low priority. From 2005-2010, the Bush administration pumped nearly $6 billion into Sudan. In early 2010, President Obama recommitted US assistance to Sudan. Where did it all go? The vast majority was funneled directly into Khartoum, the capital of Sudan, where it could be manipulated by President Omar al-Bashir, a despot who makes Mubarak look like a decent ruler. Why not spread the aid to other regions within the country, such as Darfur or southern Sudan?  Set up a system where the aid doesn’t disappear into the coffers of a leader who isn’t working in the best interest of his people and distribute it instead to those regional leaders who can prove that they are making a difference.

“A June 2010 report commissioned by the U.S. Agency for International Development found that ‘capacity building efforts in Southern Sudan are currently neither strategic nor focused. With few exceptions, [the] objectives are sweeping, unspecific, detached from actual performance, impossible to measure, and thus unlikely to succeed.” Source

This is an unnecessary state of affairs, especially considering that many of the agencies responsible for this poor performance are veteran aid providers. These agencies need to rethink their strategies and come up with a plan that can help lead all Sudanese people, not just those in the good graces of their president, reap the benefits of structured aid. This aid must be used in a way that empowers the people of Sudan, who are absolutely capable of helping themselves, especially with the additional help and resources provided by the international community.