For many people, social change is synonymous with completely altering or overhauling the rules of society. There is usually a belief that the lifestyle or principles of an entire group of people are the catalysts to an issue affecting the area. In other words, the reason why a faction of society is suffering from a major problem is because there is something wrong with the way all people of that society think. Story after story is told about how all young girls in many parts of the world are forced to get married, have children, and never continue with their education. Due to this misconception, there are many stories of successes through small societal changes that are lost, not paid attention to, or never heard. One of these important and triumphant stories is about the significance of bicycles, and the effect they have on the education of girls in Bihar, India.

First and foremost, India has a fairly large literacy gap when it comes to males and females. According to the CIA World Factbook, the literacy rate for men is about 74.8 percent and the literacy rate for females, as last known from a 2001 census, is about 47.8 percent. The number may appear to be low to many people, but it is important to note that female literacy in 1990 was a meager 34 percent. Thus, there has been an improvement in literacy for girls in India, but the number is still lacking when compared to male literacy rates. In order to bridge the gap between gender-based literacy rates, many states in India, like Bihar, focused on figuring out why there were high drop-out rates for girls living in rural villages. The answer, for many girls, was the fact that schools were located very far from their homes. It required hours of travel time for girls to walk back and forth from home to school every day. Since the issue was one of transportation, Bihar created programs to provide young girls with bicycles so that their travel time is cut in half.

In Bihar, Chief Minister Nitish Kumar created a fully subsidized program for girls with good attendance and high grades to apply for a grant to receive a bicycle and school 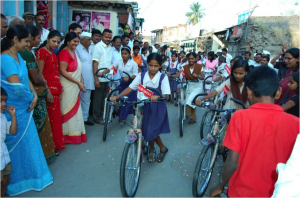 uniform. Money from the grant was given directly to the girl attending school in order to avoid corrupt actions. Though the heads of the program were afraid that parents would end up taking money away from the girls, the results showed that nine out of ten girls had purchased bicycles. In the year 2007, the first year the program was put into effect; statistics proved that there was an increase of 163,000 girls attending class nine. Today, the drop-out rate for girls from class nine to class ten has gone from 2.5 million to only 1 million, which is an astounding number. The bicycle program has proven to be an extraordinary solution for a plethora of girls who wanted to continue their education, but were unable to because of transportation issues.

The bicycle program, which has proven to be rather successful in Bihar, now serves as a model for other states in India. In Maharashtra, individuals like Jugal S. Rathi have seen the positive outcomes regarding the bicycle program in Bihar, and urge the chief minister of Maharashtra to adopt a similar program. There are already organizations, like globalgiving, that provide over 400 bicycles to girls in Maharashtra in order to increase school attendance levels. The bicycle project hopes to offer young girls from rural villages an opportunity to continue with their education, and fulfill their dreams of becoming leading members of society. However, Maharashtra does not yet have an official state-run bicycle program like that of Bihar.

The beauty of the bicycle program in Bihar teaches two very important lessons to anyone who desires to make changes in society. First, sometimes the smallest changes can have the biggest impacts. Second, it is important to note that there are stories of successes in which not every girl is left illiterate because she lives in a rural village. Though female illiteracy is still a major issue in India, there are millions of young girls from rural villages who are educated because of programs created for them. However, there are exceptions and accomplishments that must also be noted and discovered.