In my last post, I remarked that I believe most people intend to be kind. Yet sometimes, because they often lack the awareness of what it takes to be kind, they fall short of fulfilling this lofty goal. Our lack of awareness of what it takes to be kind is not the only thing that prevents us from doing good. As empirical observation from Nazi Germany or findings from the Milgram experiment suggest, people are often convinced that wrong is actually right by authority figures. I love my dad very much. Nonetheless, because I am aware of how harmful obedience can be, I will ironically dedicate this post-Father’s Day article to discussing the importance of questioning authority figures and the dangers of Paternalism as a political philosophy.

For those of you who have never taken Psychology 101, Stanley Milgram was a psychologist at Yale who, following the Holocaust, wondered how millions of people in Nazi Germany could have prescribed to such amoral orders. Essentially, Milgram 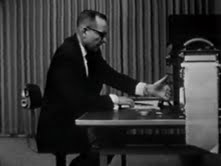 wanted to study the power of authority and perils of obedience. In this controversial experiment, the researcher asked a “teacher” (the research subject) to shock the “learner” (a confederate) if this student responded to questions incorrectly. The teacher was told to increase voltage on each successive miss. Although the learner wasn’t actually receiving a shock on missed questions, the teacher believed the learner was receiving shocks and even heard fabricated screams of pain from the learner. If the teacher expressed desire to stop administering shocks, the researcher simply calmly demanded that it was essential for the teacher to continue the experiment.

Obedience in the context of mental disorders is especially interesting and controversial. Many patients complain about forced hospitalizations or prescribed medications. They argue that treatment is not consensual and certain medications can turn them into a shell of their former selves. At the same time, such medications often allow the patient to fulfill responsibilities to himself, his family, his friends, and to the world. Here, I struggle to reconcile my strong belief in an individual’s right to autonomy, knowledge of the positive effects that certain unwanted medications can have on an individual, and understanding that not all patients are at a mental state that renders them capable of making good, practical decisions.

Most mental illnesses include fluctuations in mental state, and a patient’s ability to make good, rational decisions can vary depending on the day. At what mental state should a patient receive complete autonomy to choose which treatment he receives? There are clearly some times where a parent, spouse, psychiatrist, or neurologist should be making decisions for the patient, whereas others where the patient is fully capable of making good decisions for himself. What should the government’s role in this process be? When should they pass decision-making responsibility to a patient’s caretakers, and when should the patient retain this responsibility? These are difficult questions to answer – questions for experts in the field of neuropsychiatric conditions. One thing is for sure. We should be vigilant to monitor that these answers are based on scientific evidence. As citizens, it is our responsibility not to simply obey the orders of specialists and politicians. We must be on the constant lookout for human rights abuses by our “authority figures.”

As you may have gleaned about me from this post and my post discussing the validity of legalizing certain drugs, I take issue with the government telling its people what they can and can’t do on subjective moral grounds. I think such paternalistic laws are potentially very dangerous for society. First, they can encourage citizens to turn into mindless drones who do or don’t do certain things just because they are “the law of the land” or because “that’s just the way things are.” This mentality is dangerous, as people may stop thinking critically about right and wrong and take laws at face value. We should wonder WHY is this right or wrong and WHY is this law valid or invalid. Second, in the event that our leaders convince us to prescribe to this mindless mentality, we are open to exploitation. They can impose laws to fulfill their own agendas and stunt societal development or progress.

I am not attempting to argue that paternalistic laws, or even laws in general, are necessarily a bad thing. I just think people should be wary of their governments, or other authority figures in their life. They should do things based on an absolute sense of right and wrong rather than what their “superiors” tell them to do. I should not commit murder because I know that it’s wrong to take another person’s life, not because I know that it’s against the law. Similarly, I should not use drugs because they might be bad for my health or against my own ethical code, not because some men and women in suits decided it was wrong for me to do so. Such skepticism of authority figures is what allowed revolutionaries and civil rights leaders such as Gandhi, Mandela, and King to enact such dramatic change in their respective countries. If they gave in to mindless, paternalistic laws, the state of the world could be very different today.

I do not claim to know when a bit of paternalism imposed upon a mental health patient, or upon any ordinary citizen, is justified and not justified. However, I do know that there is a very fine line between the two. Ignoring the potentially malicious power of obedience can lead to inaction from citizens and eventually human rights abuses. Thus, in all cases in which authority figures impose their beliefs, a healthy dose of skepticism should be used.