It’s rare to read a news article on the Tunisian revolt without also reading about Facebook; it was the “Facebook revolution,” the “social media revolt,” sparked by WikiLeaks and organized by Twitter users.  But how much of the credit can really be given to social media?

The revolution began in December 2010, sparked by the actions of a young fruit-and-vegetable peddler named Mohamed Bouazizi who set himself on fire in front of a government building as a protest for the confiscation of his wares and the humiliation he suffered at the hands of a municipal official.  Images and videos of this small event, and the protest staged by Bouazizi’s friends and family that followed shortly after, were uploaded onto Facebook, and from there the revolutionary spirit spread like wildfire.  Soon Facebook became a tool for activists and everyday people, as it allowed them to follow minute-by-minute developments and to organize more protests.  The Tunisian media, tightly controlled by the government, wasn’t reporting what was happening on the ground, so people turned to Facebook and Twitter.

Facebook let Tunisians get an alternative, uncensored picture of what was going on in their country, a picture painted by their compatriots rather than the government.  The videos and images uploaded online to sites like Facebook and Twitter allowed one small protest to have a much larger impact, as a blogger could put something online that reached 50 people, and then those 50 people could reach another 50, and so on.  The use of social media sites created a ripple effect, with the protests spreading outward until the entire country was engulfed in revolution.   In response to this social media activity the government stepped up its censorship, harvesting passwords and usernames and using that information to delete the Facebook accounts and emails of bloggers, reporters, and activists.  The government was clearly scared and knew that social media sites were the main channel of communication, and so attempted to cut them off. 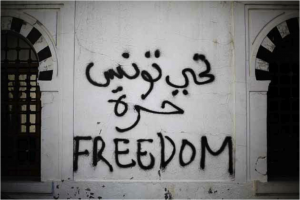 sites certainly played a key role in the dissemination of information about the protests, as the revolution spread from city to city and people were encouraged to mobilize as they saw what was going on in other parts of the country.  But to call it “indispensable,” to credit such movement to any one factor, seems rash.  Tunisians have struggled with unrest for decades, and it is that unrest that sparked the revolution.  Unemployment was at about 13% when the protests began (and that rate was even higher for college graduates), and the available jobs were often menial.  Wealth was unevenly distributed throughout the country, with the coastal areas holding most of the wealth while the interior was poverty-stricken.  Political freedoms had been slowly stripped away since the last revolution, 23 years ago, while government corruption increased.  This corruption, as well as government censorship, prevented the growing educated class from airing their grievances through normal channels, and so it was really only a matter of time before another coup occurred.

To pigeonhole the revolution as a Facebook/Twitter/WikiLeaks revolution is to ignore all of these social, economic, and political factors, and that cheapens the movement.  It shouldn’t be about the channels of communication (and in this day and age, is it really surprising that social media sites were the main channels of communication?), it should be about the collection of dissatisfied people who rose up to overthrow an ineffective government.  About the hardship they endured for decades, and about how they took matters into their own hands to rectify it.