Reducing Energy Consumption – Its Not Just For Hippies

Stopping the Use of Child Soldiers

When we think of the lives of children we often do not think of them as training in military camps and fighting in wars.  Yet, there are thousands of child soldiers involved in armed conflicts around the globe—some as young as 8 or 9.  Universally, the use of child soldiers is generally viewed negatively and international law has been implemented to protect children from involvement in armed conflict.  For instance, the 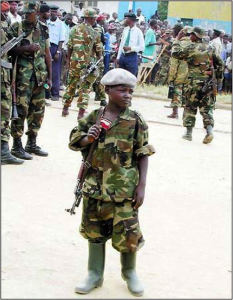 United Nations enforced the Optional Protocol to the Convention on the Rights of the Child, which bans the use of children under 18 for direct armed services and hostilities.  Between 16 and 18 years of age, however, children can be recruited for governmental military use as long as it is deemed “voluntary” and they are not put in a direct position of fighting.  The United States enacted the Child Soldiers Prevention Act of 2008, a sub-legislation of the William Wilberforce Trafficking Victims Protection Reauthorization Act (TVPRA) of 2008, citing provisions consistent with U.N. law on the protection of child soldiers.  The protection of children from governmental armed conflict recruitment is quintessential; however, are we doing enough to safeguard children from harm?

Last week, I discussed issues surrounding child sex tourism and sex trafficking around military bases, as well as federal anti-trafficking legislation addressing the aforementioned global problems.  U.S. child soldier prevention legislation made its debut in the TVPRA of 2008 for the first time.  You may be wondering what the connection between human trafficking and the use of child soldiers may be.  The answer is simple, yet complex.  Children do not genuinely have the physical or psychological maturity to consent to involvement in war.  Children involved in armed conflict are often coerced, forced, or abducted and then exploited for labor or sexual slavery in conflict regions.  In cases where children become involved “voluntarily” in armed conflict, it is often as a result of the need for food and shelter security if they have been displaced from their families.  UNICEF estimates that there are 300,000 child soldiers spread across 30 armed conflict regions.  The number is not decreasing despite international and federal laws and regulations.  As a global society, we are not doing enough to ensure children are protected from harm on multiple levels, including recruitment into armed services.

We must advance current initiatives to disarm, demobilize, and reintegrate/rehabilitate child soldiers.  For one thing, children are not fully developed before at least age 18 and there should not be any exceptions to military enlistment under 18 years of age across the globe.  While I understand that there are cultural and regional differences in regards to child rearing, development and the legal age of adulthood, it is important to have a universal minimum age to serve in any military capacity.  Regardless of external conditions, children are not fully developed physically or social-emotionally.  They are not yet able to logically-reason or rationalize consequences; therefore, are more prone to injury, abuse, trauma, and death in armed conflict.

I think that a key to positive transformation lies in international, governmental and non-governmental integration and relationships.  Each sector has powerful connections and resources to prevent the use of child soldiers in their own right.  Governments need to enforce stricter regulation of their own military standards, as well as create a tier and sanction system for other governmental bodies that are not abiding by human rights law.  The U.S. can start by ratifying the United Nation’s Convention on the Rights of the Child, the first legally binding international instrument to protect the rights of children across all human rights categories.  The U.S. and Somalia are the only two countries in the world who have not yet ratified the agreement.  Without making this commitment, the U.S. is not accepting responsibility for protecting the rights of children to the fullest extent.  The United States has provided on-going funding to Somalia’s military, which is notorious for utilizing children as soldiers; thus, the U.S. has indirectly supported the use of children in the military.  I call for the U.S. to set up a system where funding is more strictly regulated to see to it that our tax dollars are not supporting human rights violations against innocent children.

International and governmental agencies must continue to partner with NGO’s to provide funding and support for grassroots initiatives and research.  NGO’s have the ability to connect with local communities, advocate on the behalf of innocent children, and educate individuals and organizations about the reality and dangers of child soldiers.  Furthermore, non-profit groups play a significant role in the reintegration process of child soldiers back into the community (i.e. through reunification with family, working with cultural norms, providing education/school, counseling, and vocational training).  Children are resilient and I believe that with the combined and forceful effort of international, governmental, and non-profit agencies, the use of child soldiers around the world can diminish over time.

Cynthia Castaldo-Walsh is a Program and Research Intern with the SISGI Groupfocused on gender-based conflict, non-violence and peacebuilding for conflict transformation, and sustainability for conflict resolution.