A few months ago, CNN journalists David McKenzie and David Formanek covered the horrific conditions that mental patients in an asylum in Mathari, Kenya face in their documentary “Locked Up and Forgotten.” At Mathari Hospital, patients are injected by tranquilizers, raped by other patients, and locked inside the hospital. They consider themselves to be inmates rather than patients. When the CNN camera crew went to the hospital, they found a living man stuck in a secluded cell beside a dead man who had been there overnight without intervention by the hospital staff. Some of the mentally handicapped Kenyans who live with family members rather than at an asylum also face atrocious conditions. Many of these family members are similarly negligent to the care of their loved ones. According to the reporters, Thomas Matoke, a 33 year old man with a mental handicap, spends his days “tied to a steel bedframe with a piece of blue rope. He’s surrounded by pools of his urine, his mattress soiled and ripped to shreds.” This blatant disregard of inherent human rights is unacceptable. An estimated 3 million of Kenya’s 40 million citizens have intellectual or mental disabilities. They 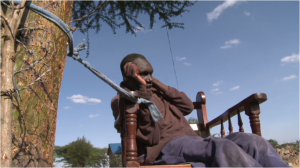 cannot be treated this way. Since the première of this documentary on CNN, Human Rights groups have lodged complaints to Kenyan president Mwai Kibaki. After all, the documentary showed repeated breaches of U.N.’s Convention of the Rights of Persons with Disabilities (CRPD), which Kenya actually ratified in 2006. But the Kenyan government is not ignorant of the problem with their mental health facilities. Government spokesman Alfred Matua admitted that the Kenyan mental health system needed massive reform and had many structural issues. It is great that the government has already acknowledged that they must reform the mental health system. However, the international community must do more than observe the situation passively and complain about UN conventions being ignored. It is easy for many of us to sit on a perch and look with disdain at the poor treatment people in Kenya with mental disabilities face at asylums or even with their family members. But just complaining about the problem will not enact change. Although the hospital staff could certainly treat patients more humanely, the root of this problem is that there is not enough investment in mental healthcare in Kenya. With other problems plaguing the country, increasing funding to accommodate more patients and to be able to treat them better, may be too low a priority for government officials. What the international community can do is increase direct funding to hospitals that are known to treat patients humanely. If these hospitals can collect more money in donations directly from aid organizations or private donors, they can expand their facilities and accommodate more patients in need. At the beginning of his documentary, David McKenzie acknowledges that viewers may find it extremely difficult to see the horrid conditions that Kenyan patients face. However, he urges viewers not to look away from the television. He proclaims that people have turned a blind eye to this problem for too long, and that by telling this story, he hopes that “the light that is shared will spark the change that many are desperate for.” The world is no longer blind to these problems. We need to spark this change not just by complaining to the Kenyan president or by citing human rights violations but by getting out our checkbooks and help give Kenya the resources to tackle a problem that has spiraled out of control.