As I mentioned in a previous post, the prevalence of neuropsychiatric conditions is skyrocketing around the world. Unfortunately, this rise in incidence has not been accompanied by a rise in amount of mental health care clinicians. Demand for psychiatry is rising faster than for any other specialty, yet medical students are opting for specialties with higher economic incentives such as dermatology, radiology, and cardiology. Currently, half of practicing psychiatrists are at least 55 years old and nearing retirement, and there will not be enough psychiatrists-in-training to adequately replace them.

Physician Jeffrey Lieberman of Columbia University mentioned his concerns about the shortage in psychiatrists in his video blog for Medscape. He claimed that to meet the 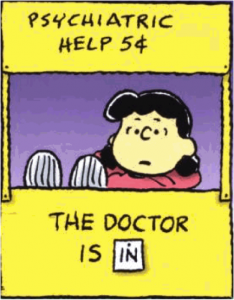 growing demand for mental health services, more physicians must be trained in the field of psychiatry, and some of the burden must be shared by primary care physicians.

Although there is an obvious huge need and scarcity of psychiatrists, how can we ensure that enough medical students will opt to choose this profession? The way our healthcare system is structured, medical students have overwhelming economic incentives to choose professions in which they perform expensive medical procedures rather than merely converse with patients and occasionally prescribe medications. Sure, basic economic theory suggests that as demand for psychiatric services increase, prices will also rise. However, even with this boost in demand, it is unlikely that these consultations will ever match the cost of removing a zit, reading an x-ray, or performing plastic surgery. An average psychiatrist makes $169,000 per year. While this salary is by no means chump change, it is dwarfed by average salaries for physicians in most other specialties. For example, an average radiologist makes $354,000 per year. Every physician must go through 4 years of undergraduate studies, 4 years of medical school, and at least 3 years of training before they accrue such high salaries. By the time they are a practicing physicians, many have accumulated hundreds of thousands dollars of student loans. With such massive financial obligations, who can blame them for choosing specialties for personal gain rather than for pursuing passions or fulfilling public need?

Solutions for this shortage in psychiatry do exist. An op-ed published in the New York Times just yesterday suggested that medical schools should not charge tuition. Under the proposed plan, people training to become primary care physicians would continue to receive a stipend in their residency programs, whereas people training for specialties would have to forgo their stipend. This stipulation was made to make primary care more attractive to students and make a plan for free medical school tuition more economically feasible. Considering how well-paid physicians are, some people may find this solution preposterous. Yet the idea has some merit. The writers of the op-ed claim that making medical school free would cost $2.5 billion, which is merely 0.1% of what the United States spends on health care every year. I propose a slight change to NYT contributors Peter Bach and Robert Kocher’s plan. I do not advocate a complete withdrawal of stipends for people in residency programs who are specializing in a field other than primary care. I think stipends should be based on expected demand for services and expected scarcity of services. Thus, fields such as primary care and psychiatry will have high stipends, whereas fields such as dermatology and radiology will have low stipends.

My proposed solution can succeed in overcoming this problem of scarcity in psychiatric services. Since medical school graduates will not be overridden with debt, they will be able to choose a specialty that aligns more with their interests rather than what career can help them pay off their bills most quickly. This, coupled with the fact that residency programs for psychiatrists would offer higher stipends to trainees than programs for more adequately supplied services, should incentivize more medical school students to specialize in psychiatry and primary care, and the burgeoning demand for such services will be met. Furthermore, since medical school would be free, the healthcare system would more closely resemble a meritocracy. Capable students who are driven away from the career because of the financial investment of medical school may choose to become doctors, and the overall quality of healthcare in America would probably improve. Finally, in the long-term, perhaps consumers may even pay cheaper fees for all healthcare services. After all, doctors would have received their training for free, and it would be much more difficult for them to justify charging significantly above their marginal costs per service. Thus, my proposed solution could not only allow growing demand for psychiatrists and primary physicians to be met but also increase the quality and affordability of health care services.