It took Syria a few weeks longer than other Arab nations to catch the fever of the Arab spring. Now that over 800 Syrians have died in protests for freedom and basic rights at 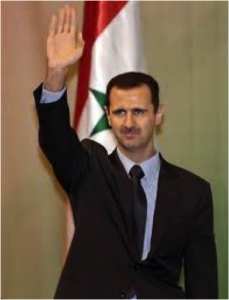 the hand of Syrian President Bashar al-Assad, the international community has decided that it’s time to step in.

Yesterday, President Obama announced that the US was joining the European Union (EU) in imposing sanctions on President al-Assad and other elite members of the Syrian government. The first round of EU sanctions took effect on May 10th but have yet to demonstrate any real results. Regardless, these sanctions are a positive measure if they are able to keep international involvement in Syrian affairs from spilling over into violent conflict as has happened in Libya.

When it comes to sanctions, some use the Iranian case to exhibit the potential negative repercussions. For years, various members of the international community have imposed sanctions on Iran in an effort to pressure them into foregoing their nuclear program. Most of these sanctions, the argument goes, have harmed the middle class more than the elites who are actually making the decisions to pursue a nuclear program. In some of the cases of Iranian sanctions, this is blatantly true. Sanctions in the 90’s on Iraq are also an excellent example of this potential peril.

In response to such an argument, it’s important to highlight a certain aspect of the current sanctions being imposed against Syria: they’re going after the elites. The US sanctions, in particular, are against the Syrian President, Vice President, Prime Minister, and Minister of Defense. They’re also targeting the assets of one of Syria’s richest men, Rami Makhlouf, in an effort to dry up financial support for President al-Assad’s violent crackdown, as well as Qasem Soleimani, a member of the Iranian Revolutionary Guard who is allegedly assisting al-Assad.

The important thing is to actually stick to the goal of targeting elites rather than saying one thing while doing another. Back to the Iranian case, Secretary of State Clinton has stated previously that sanctions in Iran should target the elite rather than the general population. Unfortunately, the execution of the sanctions did not match this sensible mentality. In the end, the Iranian public has suffered more than their despotic leadership because the sanction imposers lack the patience to see the results through. Sanctions are not meant to work at such a quick pace. When one measure doesn’t work immediately, the international community tends to press for greater results through wider economic sanctions – a measure which ultimately punishes the public and does little against the elite.

Thus, the influence of the international community in Syria is currently resting on a precarious ledge. On one hand, it must be patient with its decision to freeze assets of the Syrian elite and resist the temptation to magnify the sanctions to a level that would harm the quality of life of the common Syrian. At the same time, this sanctioning community bears a responsibility to be vigilant in their pursuit of these assets. The decision has been made to target the elites; we now owe it to the Syrian public to see this method through.

The imposition of sanctions encourages an overall increase of involvement in the affairs of Syrian politics, something any active member of NATO should be cautious of.  Recent successes in Libya should not be used as justification to launch NATO forces into an engagement in Syria. In spite of recent developments with the United Nations Security Council and the International Criminal Court that technically allowed involvement in Libya, it is not the job of any of these parties to secure the rights of all people in the Middle East.

The international community has made the right decision to pressure the Syrian elite into reconsidering their crackdown on citizens. Only time will tell if the community has the right measure of patience and diligence necessary to truly help the Syrian people.