The Absence and Authenticity of Disability in films and TV

In recent years there has been some controversy over the shortage of scripted characters with disabilities in American media and arts. Studies from the National Arts and Disability Center and the Broadcaster’s Disability Network show that although 20% of Americans between the ages of 5 and 64 experience disability, they are represented by less than 2% of characters played on television. A related issue is the absence of actors with disabilities in films.  The same studies found that over one-third of persons with disabilities (PWDs) in the entertainment business believed that auditions were refused or roles were denied as a result of a disability. Although ADA regulations and non-discrimination policies prohibit discrimination based on disability, many actors and actresses with disabilities won’t disclose their conditions or ask for accommodations for fear that they won’t be hired. So, on the one hand, we have characters with disabilities that are consistently played by non-disabled actors, but on the other hand we have talented actors with disabilities with less access to agents, drama schools, and auditions, creating a smaller pool of disabled applicants for directors and producers to choose from. With these odds, the problem is not only the small number of disabled characters, but who gets to play them and how they are portrayed.

Historically, characters with disabilities in theater and films have been portrayed as fear-inspiring villains (Freddy Krueger in The Nightmare on Elm Street series and Leatherface in The Texas Chainsaw Massacre movies), or bitter and misguided antagonists (Ephialtes in 300, the phantom in The Phantom of the Opera, Elijah Price in Unbreakable, Mason Verger in Hannibal, and Batman’s two-face), or pitiable but charming heroes (as in The Hunchback of Notre Dame, or Powder). Although things have improved since the release of some of these older films, it’s still rare to see depictions of balanced, complex, and dynamic PWDs on the screen.

Even more problematic, non-disabled actors who played disabled characters have received recognition for their performances in these challenging roles, including Daniel-Day Lewis’s portrayal of a man with cerebral palsy in My Left Foot, and Frankie Muniz’s character in the Disney Channel’s Miracle in Lane 2, who wins a soap-box derby championship despite his spina bifida, and Leonardo DiCaprio’s role as Arnie Grape, who has a developmental disability in What’s Eating Gilbert Grape. In recent years, critics have raised questions over the selection of able-bodied Kevin 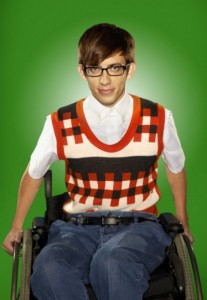 McHale to play the role of Artie, a wheelchair-user, in Glee. In McHale’s case, it was his singing, dancing, and acting abilities that won him the part, according to the producer. There are talented actors with disabilities, and I find it hard to believe that there is no bias in the selection process. At the end of the day, a progressive and diversity-driven show like Glee still chose a non-disabled actor for the part. This leads to the questions, how is disability authentically portrayed, and who has the authority to portray it?

During the 19th and part of the 20th centuries in America, minstrel shows popularized “blackface,” a routine in which Caucasian performers would use greasepaint or shoe polish to darken their faces and play caricatures of African Americans. Although this performance exposed white audiences to what seemed to be African American culture, more than anything else it perpetuated stereotypes. Similarly, “yellowface,” the use of costume paint to appear East Asian, persisted in Hollywood through the mid-1900s.  The appropriation of racial identities would be completely taboo today, and yet, it’s still acceptable for non-disabled actors to play PWDs. The entertainment industry essentially holds the power to decide what is authentically disabled, and whether non-disabled actors can transmit the image of disability that audiences will believe. You would think that the most authentic performance would be given by actors who experience the disability first-hand. However, just like in other workplaces, employers in the entertainment business want actors who are flexible and manageable, and there is the perception that disabled actors just won’t fit the bill.  Organizations like Inclusion in the Arts & Media of People with Disabilities (I AM PWD) are working within the entertainment industry to raise awareness about these sensitive issues and promote the advancement of performers with disabilities, but there needs to be more consciousness among viewers. I’m glad to see more and more characters with disabilities appear in shows and movies, because the media is the primary way to gain visibility. But I don’t think it’s enough to simply leave it at that. It wasn’t enough to simply include characters from different racial backgrounds in scripts. Progress wasn’t truly made until minority actors began to gain recognition for their acting skills and be able to play their roles without blatant stereotypes. I hope to see the same type of inclusion of actors and performers with disabilities, and I think that demand needs to come both from rights advocates and socially-conscious audiences.

To learn more about the I AM PWD Campaign please see the video below: