A Focus on Federal Legislation

Human trafficking is a persistent international and domestic problem and crime, which is bound in violations of human rights, labor, and public health standards.  The definition of human trafficking varies from source to source; however, there are common entities to its overall meaning—victims of trafficking include those who are recruited, hauled, and concealed against their will by traffickers who utilize force and coercion to exploit victims in the commercial sex industry, labor force, and/or for other inhumane purposes such as servitude and slavery.  The majority of trafficked individuals are women and children, most of whom are vulnerable and targeted due to such factors as economic crises, lack of education, discrimination, war, and other forms 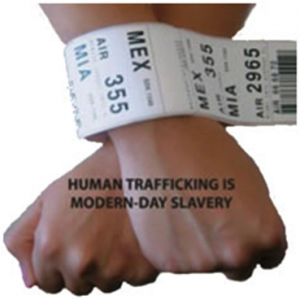 of conflict.  While there are international, federal and state laws and statutes that prohibit human trafficking, prevalence persists.  What may be shocking to most people is that there are more slaves today than there have been in all of human history!

The United States implemented a federal anti-trafficking policy on October 28, 2000—Public Law 106-386, Victims of Trafficking and Violence Protection Act of 2000 (TVPA).  The TVPA was reauthorized in 2003, 2005 and 2008.  With each reauthorization there were additions and subtractions to the legislation; however, the “3P” paradigm, or main goals, remained the same:

It is commendable that the U.S. government implemented and continues to amend federal legislation to fight modern day slavery, which was long overdue.  With each passing reauthorization, weaknesses have been identified and statutes have become stronger.  Without being proactive in the identification of inadequacies and the pursuit of more innovative and practical strategies, positive social change cannot occur.

The TVPRA of 2003 created a new focus on eliminating child sex tourism for the first time.  This was an addition to the original TVPA of 2000 that only mentioned sex tourism twice and with no specific strategy for elimination.  The provision required airlines to provide passengers traveling abroad with information surrounding the illegality and dangers of child sex tourism.  While this is a step in the right direction, I cannot help to wonder how effective this practice actually is in reducing the problem.

It has been a surprise to me that American sex offenders are allowed to obtain passports and travel overseas—especially due to the fact that over 25% of child sex tourists are American, with the number rising in certain locations (i.e. Costa Rica where it is 80%).  Child sex tourism thrives off of a demand for it and by allowing potential child sex tourists to travel to locations where the business is prominent poses a great risk to the children enslaved.  It is not only bad practice in reducing child sex tourism, but is directly damaging to the involved children who become susceptible to sexual, physical, and emotional hardships that will last a lifetime.

In order for prevention to be more effective, I propose stricter provisions to combat the child sex industry such as restricted travel of sex offenders, more explicit and diversified information provided to travelers, and formal training of airline personnel on spotting sex tourists and reporting potential threats.  Some European airlines have adopted campaigns against child sex tourism in the forms of in-flight videos and brochures—something that is necessary for American airlines as well.