The Tunisian Revolution ignited protests across Northern Africa and the Middle East, but they have not been the only areas affected. Much to the Chinese government’s dismay, human rights and pro-democracy groups in China have used the Middle Eastern and African protests as an inspiration for their own campaigns. This has led to incredible censorship above and beyond what China is infamous for.

The Chinese government does not like to talk about touchy subjects, and so those subjects become taboo or illegal. Tibetan and Taiwanese independence, the Tiananmen 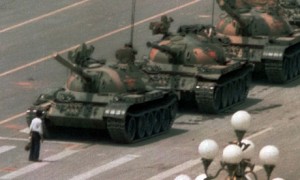 Square protests, pornography and religion are all highly censored and regulated topics, the discussion of which can lead to incarceration and worse. China has received a great deal of criticism from the international community and organizations like Freedom House and Reporters Without Borders.

Recently, China and Google have made the news with Google’s bitter struggle to find a foothold in the Chinese market while attempting to remain open and uncensored. China has launched several cyber attacks against Google, attempting to access information on protestors and dissidents who use Google’s services.

In the wake of the revolutions in the Middle East, China has adamantly condemned the uprisings, and denied that they have resulted in any similar anti-government feelings in China. China has used passage of a UN Security Council Resolution calling for a no-fly zone and the commencement of attacks against Libya (a resolution it did not exercise its veto powers against) to wage a propaganda war against the West in an attempt to nip anti-government sentiment in the bud.

(This is, of course, not to say that there is no truth to China’s arguments about oil power struggles and Western interventionism. As I discussed in my last blog, propaganda and motivation are not always on par with one another. In fact, now is as good a time as any to mention that the United States has its very own wikipedia article on censorship as well.)

Over the past several weeks, China has put in place a system where the use of the word “protest” during a phone conversation or in a text message will result in immediate denial of service, a new level in their electronics and communications censorship program. All in all, China’s paranoia and extreme lack of transparency have been and continue to be extremely oppressive and dangerous for its people. The citizens of China live under the vigilant eye of Big Brother, and with the introduction of automatic voice screening technology employed by the government to monitor and end potentially dissident conversations, China’s censorship powers continue to grow.

The revolutions of the past month and a half have renewed the feelings in Chinese citizens that the government can be held accountable to its people, and the next several months could see very interesting, and quite possibly violent shifts in the politics of China.