David Kato, a prominent Ugandan gay rights activist, was bludgeoned to death with a hammer in broad daylight at his home in Uganda, dying on his way to the

hospital. News of Kato’s death reverberated throughout the world as friends, leaders, activists and human rights organizations paid tribute to a man whose lifelong legacy championed human dignity in the face of man’s inhumanity to man.

Kato, a teacher who eventually quit his job, to focus all his attention on Sexual Minorities Uganda (SMUG), a non-governmental organization based in Uganda’s capital Kampala. SMUG advocates for the protection of Uganda’s gay, lesbian, bisexual and transgendered people. David Kato was SMUG’s advocacy officer and, some would argue, the founding father of gay activism in Uganda.

He came out to family members before leaving for South Africa. In transitional South Africa, where vestiges of apartheid and anti-sodomy laws were still in place, he saw these issues dismantled through activism, witnessing firsthand the power of individual conviction grouped by a common cause for the creation of a greater good. Struggle against apartheid gave birth to a multiracial democracy; social justice based on activism lead to the growth of South Africa’s LGBTQA movement. By the time Kato returned to his native Uganda in 1998, he was equipped with a cause, schooled in commitment, armored with an agenda, focused on its execution. He spent a week in police custody for activism the very year he returned. Once released, he plunged head and heart into Uganda’s underground LGBTQA movement.

In 2009, American evangelical Dr. Scott Lively led an anti-gay conference in Kampala, Uganda. Days after the conference, an Anti-Homosexuality Bill was introduced to Uganda’s parliament. The Bill proposed

the death penalty for some homosexuals. The bill came under intense pressure from human rights activists and governments around the world; its ratification is pending, shelved. But homophobic sentiment, national bigotry and hatred was fueled and justified along religious grounds from then on.

Case in point: a short while after the 2009 anti-gay conference, Kato’s picture was placed on the front page of Uganda’s tabloid magazine Rolling Stone, where the headline written in bold capital letters read as follows: “100 PICTURES OF UGANDA’S TOP HOMOS LEAKED”. Above the front page photo of Kato was an urging by the paper: “Hang them”. Death by execution, the paper suggested, would rid Uganda of gays such as Kato, so kill him. His photo was plastered on the front page for the country and world to see; his name listed among one hundred others to be targeted. Kato sued the paper on grounds of violation of privacy and won, but often spoke of violence and death threats thereafter, making police allegations that his murder was actually a robbery gone awry (rather than a hate crime spurred by fearless advocacy for freedom of sexual expression and orientation), somewhat suspect.

There are many who argue the recent influence by white American evangelicals in Uganda is what led to Kato’s death. Their terror tactics awakened something in Ugandans that was never there to begin with. After all, gays have been in Uganda since the beginning of time. What American evangelicals did was manipulate Ugandans because of their devotion to the Christian faith, manipulated the Bible, adopted terror tactics through religious-speak where hatred targeted an easy scapegoat—homosexuals. Kato’s colleagues say to rid Uganda of foreign intervention is to free their country for the better.

There are others who argue Africans tolerate homosexuality in much the same way they tolerate extramarital affairs or polygamy. Desire is tolerated, understood, even accepted; but a homosexual lifestyle, abandoning the duty of marrying someone of the opposite sex for a lifelong commitment to someone of the same sex, is what African social norms find moral reprehensible. Why? Because the desire is human but the lifestyle is foreign. One factor that impacts this is the extremely high infant mortality rate. Because infant mortality is so high their is a necessity for many African children to be born. Additionally is the low rate of  traditional African families adopting outside their family structure. So, an African family may raise children from a deceased cousin or sister, but they won’t take a child off the street into their home and adopt. Examples of this type of adoption are very rare in many places in East Africa. A homosexual lifestyle without adoption, threatens the family structure. Homosexual desire, if the person is in a heterosexual marriage with children, does not. The conflict between homosexual desire as acceptable but a homosexual lifestyle as intolerable, is at the heart of the African debate. In other words, the lifestyle makes someone gay, not the desire. Some Africans will argue to tolerate same-sex desire so long as it does not lead to same-sex partnership, commitment, a lifestyle like David Kato’s.

At age 46, Kato left Mr Greenin ja Euron tapaan Come On on valinnut sivuilleen peleja useammalta kuin yhdelta pelivalmistajalta. a powerful legacy that speaks to all but perhaps most loudly to queer Africans of non-conforming genders on the continent and in the Diaspora. It accents our fundamental mission here on earth:  To learn about each other and, in so doing, learn more about ourselves. We are not all the same, though the professional, adult world asks us to be. But we are different, all of us, and different people relate differently to this world, which is what makes the world better and life richer. No one person, no one sexuality, no gender expression, no one gender, no one creative form of being, is more important than another.

Killing does not rid the world of difference. One less Kato in Uganda does not make Uganda any less gay, believe me. One living Kato alive and breathing in Uganda does not make Uganda any more gay. Just as one more woman does not add to sexism or one more person of color adds to racism. We only assume it does or would because our investment in making the world as we want it, denies the world from being what it truly is: diverse, complex, unscripted, multifaceted, nontraditional, untamed, unrehearsed, unpackaged because it is human, human, human.

David Kato is not dead. He soars to our Maker, the One who birthed him gay, radiant, warrior, lover, eternal. And his sword remains in the arena, sharpened for struggle, alive among the smoldering ash heaps that make up its ruins. And so he survives, warrior eternal.

If man’s inhumanity to man truly gives us reason to pause, then pause. Stand still, take a deep, sobering breath then maybe light a candle in the name of David Kato, a man who devoted his energy, intellectual power and physical body to a spiritual cause that is radical by its very definition—LOVE. If the sobering power of a solitary vigil does not speak as loudly as communion with like-minded folk celebrating David Kato’s monumental contribution to the human family as a queer African, come take part in the New York City vigil in remembrance of David Kato on Thursday, February 3, 2011 at the Dag Hammarskojld Plaza on 48th street and 1st avenue at 4pm. This queer African of a non-conforming gender will be there to greet you. 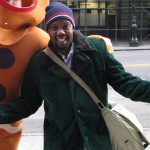 Nick Mwaluko was born in Tanzania, raised mostly in Kenya and other east African countries. Nick came to New York, transitioned from anatomically female to male, and is a playwright.  His play  S/He, the story of a man in a woman’s body, has its second run in southern Florida on February 27, 2011. Waafrika, a lesbian love affair set in a rural Kenyan village in 1992 immediately following Kenya’s first multi-party elections, will have a showcase run in October 2011 following a reading March 30, 2011. Other of Nick’s plays include Blueprint for a Lesbian Universe, Asymmetrical We, Brotherly Love, Trailer Park Tundra, Are Women Human?, and others
zp8497586rq