Agricultural subsidies implemented by the developed world are keeping African farmers in poverty. Countries such as the United States, Japan, Australia, and the 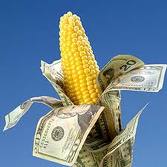 members of the European Union heavily subsidize their farming industry, resulting in dramatic overproduction and a resultant drop in food prices as the global market becomes flooded with products such as cotton, sugar and maize (corn). In theory this sounds like a good idea—farmers in developed countries are protected by their governments, and the consumers in developing countries (such as those in Africa) get to benefit from inexpensive goods, right? Wrong.

What happens in reality is that the drop in prices hurts African farmers, who depend on the prices of the goods they sell to be high enough to earn a decent profit—which happens to be quite significant when considering the fact that African countries rely much more on their agricultural sector than do developed countries. A maize farmer in Zambia, for example, will not earn enough money to feed his family when he has to sell his corn for less than what it cost him to grow it. His corn is not competitive on the world market when the United States can sell it’s corn for less because the U.S. has encouraged their farmers to overproduce, with almost $4 billion in subsidies last year alone. Developed countries as a whole spend $250 billion annually on agricultural subsidies (incidentally, ten times the amount that the UN estimates could combat HIV/AIDS).

Cotton is a prime example of this damaging distortion in trade policy. The United States is the largest exporter of cotton in the world, not because it has more farmers (there are approximately 25,000 American cotton farmers, compared to 10-11 million in West Africa), but because U.S. spends an average $3.9 billion per year on its cotton subsidies. In comparison, the 10 million West African farmers rely heavily on cotton prices for their source of income. For example,  Benin relies on cotton for 77 percent of its export earnings, Burkina Faso 57 percent and Mali 30 percent. Due to depreciated cotton prices, West African countries lose up to 16 percent of their GDP annually, which is up to 40 percent less than what they receive in international aid (for example, in 2001, Mali lost an estimated $43 million due to lower export earnings, yet received only $37 million in international aid). It is estimated that if the U.S. were to withdraw its subsidies on cotton, the world cotton price would rise approximately 12 cents per pound, boosting West Africa’s farmer’s revenues alone by $250 million per year.

Where Western governments subsidize their farming industries, they are actually contributing to poverty in parts of the world where local farmers cannot compete with cheap goods. African governments are restricted from subsidizing their own farmers as a form of protection under international trade law, yet the U.S. and Europe continue to spend billions of dollars per year at the expense of the world’s poorest. Policies like these prevent hardworking people in other parts of the world from sustaining their own living, making them reliant on aid from developed countries who are contributing to their poverty in the first place. This paradox in policy is one that requires serious reflection, and ideally will be one that can be changed in the near future as more people become aware and take action.