“The birth and rise of new media is, however, changing the story for many girls in Africa who have been given an opportunity to compete with their male counterparts. “- MAUREEN AGENA,

I’m sure it would come to no surprise to any of you if I told you that technology was one of the quickest way to gain attention on a new movement. It’s well known, in the western world at least, that viral campaigns are a quick way to garner attention for your campaign- take the Kony 2012 campaign for example. But what would happen if we took 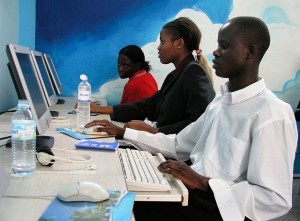 the power behind technology and used it for education? Recently in South Africa and Uganda, several different organizations have been trying to do just that. There was even a whole conference dedicated to bringing technology into African classrooms.

However, what I find even more compelling than the conferences, is the individual groups of women who are setting out to motivate and inspire other women within their countries. She’s the Geek is a group out of South Africa who have the following mission statement: “To educate and empower women through the use of various computer, mobile and social technologies that is always fun and in turn having them leave a legacy for the next generation”

Though She’s the Geek focuses more on spreading the news about technology and empowering women who are already involved in the field, they also have education initiatives. Digiwomen is a twelve week program run by She’s the Geek. Focusing on women who come from difficult backgrounds, the goal is to give them a second chance by teaching them a variety of skills focused around technology that will help them get a brand new start. The program covers everything from entrepreneurship to mobile literacy. The She’s the Geek project blog has several updates on the program and shows just exactly what the women are doing, why they’re doing it, and what they’re getting out of it.

Furthermore, these women are getting noticed. They have hosted TedXTalks and serve on the boards of collaborative spaces. See an example below

Second, in a quickly growing world and economy it’s important to make sure that women and girls are able to stay up to-date with all of their job options. While girls are still lacking in basic education in many countries, initiatives like She’s the Geek’s Digiwomen has the potential to help educate and create job access for girls and women who were not fortunate enough to receive a full education as children.  As they even write on their website, it’s a second chance.

I believe movements like this are important. It’s no secret that there are far less girls in school than boys, but we don’t often hear what happens to them as adults. Though the tech programs African nations target girls, many of them also target women, and that is what I find so important.

While we should continue to strive to get all children in school, it is still important to educate those that were not given a proper education growing up. By creating programs for them, these organizations are giving them a shot a livelihood, they’re giving them something they didn’t get while growing up.

Unfortunately, I couldn’t find a lot of information on how to help these organizations besides advertising, but I encourage you to follow them on twitter here and here  and learn what they’re all about. I also encourage you to support the women you know who are in the STEM fields.