In the past, when I asked my father whether he wanted to immigrate to another country, he refused without any hesitation. Now, he might hesitate due to a new concern – food. It’s not because he could not get enough to eat, but because there is very little food unpoisoned in China. Chinese people make arduous efforts to get richer, only 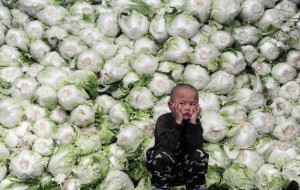 to find out that even money cannot buy safety.

From lethal infant formulas, “lambs” made from rat meat, cabbages sprayed with formaldehyde, gelatin medicine capsules containing excessive chromium, to soybean sprouts the growth of which were accelerated by plant hormones, Chinese criminals never lack imagination of what to add into food. There is a famous joke online saying that every Chinese person is a living element table, because they have ingested all kinds of chemical elements from their daily food.

There is an old Chinese saying that “Food is the God of the people.” Chinese cuisine is also ranked as the second tastiest food in the world. However in China, people are not enjoying delicious food, but suffering from the concern of the terrible food safety situation.

Take the infant formula scandal in 2008 for example. In this incident, China reported an estimated 300,000 victims, with six infants dying from kidney damage. At the outset, a few cases were reported but they were ignored and 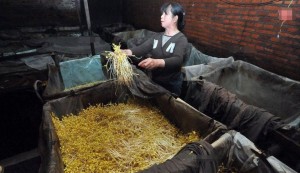 even concealed by the government. Later on, when 16 infants, who had been fed on milk powder produced by Shijiazhuang-based Sanlu Group, were diagnosed with kidney stones, the scandal could not be cloaked any more. Within a month, more than 20 dairy companies, almost all of the domestic brands, were revealed to have the same problem.

However, if the government could investigate the whole industry throughout the entire country within a few days after the incident, why couldn’t they conduct precautionary regulation prior to the incident? In my point of view, the scandal-laden food industry indicates both the regulatory loopholes in the government and the unprecedented landslide of morals in China. To let the people have food safe to eat, the government should strive to combine legal construction with moral construction.

First of all, streamline the food safety legal system. It would be a good news that the amendment to the existing food security law has been prioritized in the legislative agenda. To curb the proliferating food safety scandals, tougher regulation should be enforced in all of the three ends: customers, manufacturers, and officers. In the final phase of the product chain, customers deserve tighter protection. Having studied law both in America and China, I strongly suggest China learn from America to build up a comprehensive punitive damage system. In Liebeck v. McDonald’s Restaurants, the court’s verdict included not only necessary compensatory damages, but also an astronomical sum of punitive damages, which set the precedent for an effective deterrent and punishment. The legislative body could create a new crime related to food safety in the criminal law in order to deter the manufacturers as much as possible. Meanwhile, stricter supervisions on the governmental officers should be given extraordinarily heavy weights to. In 2007, Zheng Xiaoyu, the former director of the State Food and Drug Administration, was sentenced to death because of notorious bribery. This case unveiled the tip of iceberg of the inside story of food industry. Therefore, external oversight must be strengthened and financially encourage the public to report unlawful acts of the officers.

Additionally, China needs an intense moral reconstruction to raise food manufacturers’ awareness of moral self-discipline. Although I am studying law all the time, I clearly understand that laws work most productively only when they are combined with morals. However, the food safety crisis sent a signal of China’s moral decay. What the guilty food processors and manufacturers are focused on is solely profit, without any consideration of ethics or morals. In five-thousand-year-old Chinese tradition, integrity and honesty play a critically important role in the society. This is no longer the case. After 30 years Reform and Opening, kaleidoscopic social changes and dramatic surge of wealth give rise to the sweeping money worship among all walks of life. In pursuit for maximum profits, the perpetrators in the food industry employ any possible means regardless of their inner moral condemnation. The time to reconstruct the societal moral system should have come earlier. The government ought to spare no efforts to promote moral education to businessmen about their social and moral responsibilities. Foreign readers may be skeptical about its feasibility, but do not lose sight of the Chinese government’s incredibly powerful propaganda machine. As for concrete implementation, for instance, the government can invite scholars to write straightforward brochures about corporate responsibilities and encourage the enterprises to study them. Only those which have completed study and passed inspections are eligible to obtain “integrity logo.” Under the law of the jungle, every corporation corporate will scramble to gain the logo for fear of losing customers. In that case, the ethical standard of corporations will hopefully climb up.

Having food safely is not merely a health issue, but an innate human right. To restore supports and credibility from the people, the Chinese government should act immediately, starting from rebuilding people’s confidence to what they eat every single day.