Will a country where there are 18,943 people in per square mile open its door for more immigrants?

The Singapore government says yes. The Lee Hsien Loong administration published its latest population white paper in January, in which the government projects to increase its population to 6 million in 2030. This ambitious blueprint will be accomplished by encouraging childbirth as well as having 25000 non-citizens naturalized and having 30000 more Permanent Residents (PRs) per year. Currently, more than five million people living in its 274 sq mi territory, 38% of whom are immigrants.

Unpredictably, the consequence was dramatic. More than 4000 Singaporeans staged a rare demonstration in 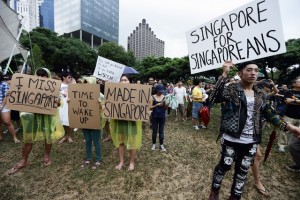 February, one of Singapore’s largest ever protests. The peaceful three-hour rally took place in heavy rain. The protesters blamed immigration for rises in property prices and living costs. What is wrong with Singapore’s immigration policy?

In my point of view, it is immigrants that forged Singapore. Since its establishment, immigrants have constantly been the driving force of the development of Singapore. As a city-state with a small domestic market and scarce natural resources, it is impossible for Singapore to create such a large-scale economy simply by its own citizens. That is the reason why Singapore has long been welcome to foreign manpower at both high and low ends of the labor spectrum to overcome the limitations of local human capital. The 1970s witnessed Singapore’s rise as one of the Four Asian Tigers, which was partly attributed to the overflow of cheap foreign workforce and the contributions made by highly educated foreign professionals in banking and manufacturing sectors. In 2010, one million immigrant workers made up 35% of the total labor force. Given such strong dependence upon immigrants, why do Singaporeans oppose the government to further liberalize its borders?

It is an interesting phenomenon that although its per capita income of 50332 dollars makes Singapore the sixth richest country in the world, the average salary in Singapore is lower than other industrialized countries. The drivers of growth in Singapore – high finance, high-end tourism and highly capital-intensive manufacturing – tend to benefit high-income earners more than the average workers. To maintain export competitiveness and attractions to foreign investors, the Singaporean government intentionally lowers the income level of middle and lower classes, so that the foreign investors are able to obtain more profits. Ignorance to social equity is seemingly rooted in the minds of Singaporean leaders, as Lee Kuan Yew, the Father of Singapore, once astonishingly declared “Never mind your Gini coefficient!” Manifestly, economic inequality between affluent immigrants and impoverished locals substantially gives rise to the objection to a more open immigration policy, and furthermore deteriorates social differentiation. 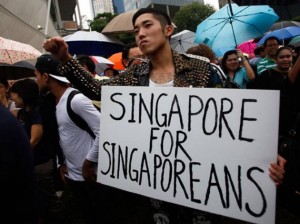 More and more complaints about wealthy immigrants have been seen, as immigrants disobey the laws, seize the job opportunities, and widen the wealth gap between rich and poor. A Ferrari crash in 2012 was the best evidence. On May 12, 2012, a wealthy Chinese expatriate crashed his million-dollar Ferrari into a taxi killing himself and two others in Singapore. The incident sparked severe outrage in Singapore, further spurring xenophobia among common people. Angry Singaporeans tend to point their fingers to immigrants for all of the miseries in their lives without remembering that most of them are also descendants of immigrants.

It is worth noting that some local people are unwilling to engage in simple labor, no matter how profitable it is. For instance, crane operators can be paid $7000 Singapore dollars ($5600 US dollars) per month in Singapore. However, National Development Minister Khaw Boon Wan indicated that more local crane operators are needed, while only half of those workers are Singaporeans. Having grew up in an extremely wealthy society, Singaporeans abandon their hard-working tradition, rather choose only those “decent” jobs. How can Singaporeans complain about less job opportunities if they themselves arrogantly neglect the jobs that already exist?

The dilemma the Singaporean government is facing stems from the fact that, on the one hand, it has to cope with the rising anti-immigrant sentiment among Singaporeans, on the other hand, the sustainability of economic growth necessarily rely on the influx of foreign workers. How to streamline social distribution and achieve economic equality will be the issue that the government has to consistently give extraordinary weight to. In the meanwhile, the efforts should never be just unilateral. Singaporeans ought to actively enhance civic awareness and positively avoid to be shortsighted about their future.