Health Is A Right. Health Equity Is Our Goal

In the past few weeks, the Middle East and Europe have been the dominant geographic regions marking headlines across the media.  A majority of people have been tracking the economic situation in Cyprus, the continuing violence in Syria, and President Obama’s recent trip to Israel.  However, it is rather astonishing that the media spotlight has barely honed in on North Korea.  The hostile Communist nation has placed its missiles and artillery units “on highest alert,” and made several threats to attack South Korea, mainland United States, and U.S. bases in Hawaii and Guam.  North Korea’s military warnings are, in part, a response to South Korean President Park Guen-hye’s recent speech calling on its neighbor to dismantle its nuclear program.  The speech obviously sparked the criticism and anger of the North Korean military, and the backlash is proving to be dangerous.

Though North Korea has only just put its missiles on high alert, the country has been a ticking time bomb these past few months.  In December North Korea conducted its third nuclear test, an action that prompted the US and South Korea to urge the UN Security Council to impose greater sanctions on the volatile country.  Furthermore, earlier this month the US and South Korea resumed their annual joint military drills.  North Korea claims that the drills are a blatant sign that South Korea, with the help of the US, is planning on attacking its neighbor.  South Korea and the United States have made it clear that the drills are not aggressive, but merely a routine defense strategy warning North Korea to not attack the South.  Despite the fact that North Korea is furious over the drills, the US decided to fly nuclear capable stealth bombers over South Korea this past Thursday.  The idea was to showcase US military prowess, and keep the North from starting a war with America and South Korea.

It is clear that North Korea is angry with the United States, and seemingly the world, but what does it hope to achieve with its rhetoric?  First, the country may simply be trying to state that it has been treated poorly by the United Nations and the world in general.  In fact, North Korea, along with Iran and Syria, opposed a draft of the Arms Trade Treaty, which aims to regulate the global arms trade.   All three countries have been accused of human rights violations, and are bucking under heavy UN sanctions.  By refusing to cooperate in a global arms treaty, the three nations are making it clear that they feel no need to green light treaties which they feel will negatively affect them.  In the case of the arms treaty, all three countries have been hit with arms embargoes, and fear that the treaty will strengthen those embargoes. 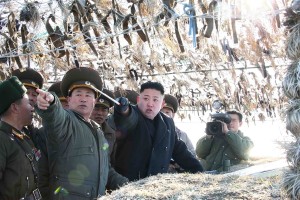 Second, which is connected to the first, North Korea may very well be attempting to attempting to open talks with the US and South Korea.  Though it seems as though the North is going backwards with its diplomatic relations, there is a slight chance that it is trying to force the US and the South to give concessions, ask for humanitarian aid, or even call for less sanctions.  However, this may be a difficult line of reasoning since North Korea has cut all telephone communication with South Korea, and has reportedly rejected the armistice that settled the Korean War.

It is difficult to fathom an all out nuclear war in this day and age, but the threats North Korea is spouting seem very real and frightening.  Even if the country is all bluster and no action, the claims should not be taken lightly, and efforts must be made to deal with the issue.  It would be smart of the US to not fuel the flames by flying nuclear capable planes during practice military drills, since the drills themselves anger North Korea.  Furthermore, studies of North Korea’s nuclear program, which has become slightly stronger since 2009, must be conducted in some way.  Perhaps new diplomatic channels should be opened between North and South Korea, with a nation such as China acting as the mediator.  In this way, another country other than the US can get involved in working with the Koreas, and perhaps North Korea will act less hostile.  Of course, nothing can come about if North Korea is unwilling to shed its aggressive cloak, and that scenario is currently a pipe dream.