Let me just start off by saying that I love Twitter. I really do. I realize that there are a lot of Twitter haters out there. (Also known as people who have never had a Twitter…) However, they’re the ones who are really missing out.

Why do I love Twitter? I love Twitter because it gives power to the people. It gives them a voice. It allows them to take a stand. It unites people who are halfway across the world. A great example of this? The #NotBuyingIt campaign, which exploded onto the scene last Sunday. 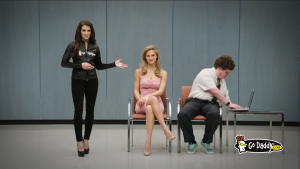 Super Bowl commercials are kind of a big deal. They’re the one time a year people actually look forward to seeing ads. It’s the one time of year they have our full attention. The one time we don’t change the channel. It’s all part of the Super Bowl experience. How else would you fit into workplace lunchtime conversation the next day?

However, within the last couple years, viewers have begun to realize the sexist nature of many Super Bowl ads. The blatant sexualization and objectification of women (and an increasing number of men) in many of the commercials have caused people to take a stand. One of the strongest supporters of this movement? A documentary named Miss Representation, which has been working throughout the last couple years to transform the way that women are portrayed in the mainstream media. Miss Representation is responsible for launching the #NotBuyingIt hashtag two years ago, as a means of reminding consumers of the purchasing power they held against the mainstream media. At the 2012 Super Bowl, the hashtag generated nearly one million real-time tweets. However, it really exploded onto the scene last Sunday during Super Bowl 2013, generating more than 10,000 real-time tweets and reaching over 8 million people.

@tiptoetown: My kids are watching the Super Bowl. Do you mind not demeaning women with strip club scenes! @2BrokeGirls_CBS I’m #NotBuyingIt.

@4thWaveFeminist: along with the car, you get a free blonde, sexy lady! it’s a perk! ummm, try again, @MBUSA. #NotBuyingIt#SB47

@AskDrDae: @MyGildan Promoting taking off a woman’s clothes while she is passed out? Are you selling rape culture or T-shirts? #NotBuyingIt

@Michele_Mana: @Kia You ask consumers to “respect the tech”, but you can’t do the same for women. #SB47 #NotBuyingIt

@teecer: Why do you introduce your beer with a woman’s legs? @blackcrown @Budweiser We’re #NotBuyingIt @RepresentPlege!#SB47

@enstock: Really disappointed with your Super Bowl ad, @CarlsJr. Please try to sell your burgers without selling out women and girls. #notbuyingit

@femzkenz: stop teaching our boys that bravery is kissing a girl you’ve never talked to & that girls are simply objects or rewards @audi #notbuyingit

@jkundhi: Give it a rest @GoDaddy. Women are sexy AND smart. Glad I took my business elsewhere. #NotBuyingIt

Who do you think were the worst offenders of the night? Did any of the commercials cause you to rethink your purchasing decisions? Let us know by tweeting us at @Notenoughgood or simply comment below.