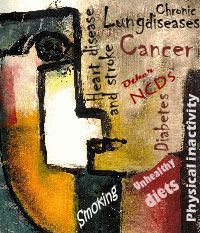 Why is it so important to not neglect noncommunicable diseases? Here are five good reasons:

1. Non-communicable diseases are related to all eight millennium developmental goals and can thwart successful completion of the goals. For example, if one person from a family is diagnosed with heart disease, expenses of that family are mostly likely to increase. Many families will be forced to reduce expenses and possibly withdraw their children from school. Similarly, uncontrollable asthma can increase absenteeism and will reduce the chances of children actually completing primary education. If children are unable to complete school or receive an education, it limits their economic opportunities in the future. The success of  the eight millennium developmental goals may be undermined because chronic diseases are not taken into account.

2. This reason is pretty simple, climate change. As the earth’s temperature is changing, the environment and weather are also changing. Climate change can have a negative effect on the food supply, which can eventually lead to malnutrition and decrease the amount of healthy food options available. Extreme weather conditions and reduced air quality can have adverse effects on human health. For instance, extreme weather events can increase risk for mental health distress. Reduced air quality can easily have adverse effect on respiratory system. Rates of chronic illness are more likely to increase as the climate changes.

3. People are living much longer than usual. For instance, the average normal life expectancy in India is about 67. In 1960, the average life expectancy was about 41 years old in India.
People are outliving their ancestors and are developing chronic illnesses that were never seen in their families before. Also, the majority of people in the last century died from infectious diseases, therefore chronic illnesses did not emerge till people started living longer because of medical advances, control of communicable diseases, and changes in lifestyles.

4. Non-communicable diseases affect the economic development of a country and increase poverty levels. People who are diagnosed with a non-communicable disease are more likely to fall ill and be absent from work. Many people who miss work more than often because of their chronic illness can eventually lose their jobs. After losing a job, many people are unable to get another job. Often, unemployment is one factor that causes poverty. This entails a loss of productivity economically and creates a economic burden.  Comorbidity is prevalent in many individuals. Comorbidity refers to having more than one coexisting conditions or illnesses. For example, an individual may have both diabetes and heart disease. Usually, these patients need constant healthcare to manage their conditions and a way to pay for the care. There are various indirect and direct costs connected to non-communicable diseases such as transportation, paying for prescriptions, and losing salaries. The cost of a chronic illness can end up being very costly. 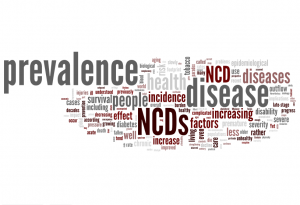 5. Megacities are becoming a trend in many countries. Megacities are cities that have at least ten million residents. Urbanization is moving along quite well in developing countries. It is estimated that about seven billion people around the world will be living in cities by the year 2050. Along with new cities, comes along traffic, pollution, and overcrowding. These factors can increase the rates of non-communicable diseases among the city population.