A few days ago, I was reading the Huffington Post before class, and I saw something so  innovative that I have never seen before. We all the have seen celebrity paparazzi pictures all over the internet or on the television. Usually there are pictures of celebrities dining out, shopping, walking or just doing their regular daily errands. Similarly, Emma Stone and Andrew Garfield were dining in at a local restaurant and as usual paparazzi were surrounding the restaurant. Instead of running away from the paparazzi, they did something entirely different. As they came out, they carried cardboard signs saying:

“We just found out that there are paparazzi outside the restaurant we were eating in. So…why not take this opportunity to bring attention to organizations that need and deserve it? www.wwo.org www.gildasclubnyc.org. Have a great day!”

Emma Stone and Andrew Garfield are supporters of Gilda’s Club NYC, which is an organization that creates a supportive community for anyone that is living with cancer and Worldwide Orphan Foundation, which help support orphans around the world through health, education, and other services. Usually, we see celebrities covering their faces to avoid the cameras or running away from the paparazzi into their cars. I was so used to seeing that, that I was kind of shocked seeing Emma Stone and Andrew Garfield taking advantage of that situation in such a positive and innovative way. It shows how passionate they are about their causes. That got me thinking, how much impact do celebrities actually make when it comes to social good? Does commitment and passion make a difference? 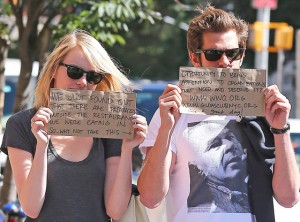 Celebrities are a big deal almost everywhere around the world. Teenagers idolize their favorite celebrities and want to support their favorite celebrity to the fullest. Usually, when you go to the supermarket, you see them on magazine covers while waiting at the checkout line. Sometimes, the latest celebrity news is reported right on your yahoo homepage. Some of us probably sercetly visit perezhilton.com or tmz.com to find the juicest gossip about our favorite celebrity during class or at work. We all love to know what they are interested in or what they are up to next. In short, celebrities are connected into our daily lives whether as inspiration or entertainment.

Many celebrities often support a cause that is close to their heart or sometimes they are offered to be part of cause or a campaign. Celebrities are able to use their fame and presence to inspire masses to do the same. In 2009, Daily Beast conducted a study on the effects of celebrities on charities and also included a list of fifty celebrities that make the most impact by their support. Justin Timberlake was ranked at number one, his support to his charity was worth $9.3 million. Madonna was at the number two position worth $5.5 million for her charity, Raising Malawi. However, Paris Hilton’s support to her charity was only worth $538. It was concluded that having a famous person supporting a cause is not enough, commitment and passion is also very important to create a sustainable impact. These statistics may have changed throughout the years, however I think the conclusion would be the same even now.

Celebrities can have positive impact on their charities and causes. They can make even a bigger use of their fame in small ways similar to what Emma Stone and Andrew Garfield did. These celebrities were able to spread more awareness about their causes by using the paparazzi in their own favor. What do you guys think? Should more celebrities use their fame to promote social good every time they are able to?