What really happens when you get rid of those old CDs?

Cupcakes. Skinny jeans. Reality shows. All are trends that have exploded in popularity within the United States in the last decade. Another recent trend? “Saving Africa”. Earlier in the week, I wrote about the common myths and misconceptions having to do with the continent of Africa, many of which stem from the mainstream American media. The entire continent of Africa has often been portrayed as a continent caught in chaos in the media. News reports of famine, disease, and violence have come aplenty, filling news stations across the United States. However, in the last couple decades, the tide has begun to change.  Are all the countries in Africa still viewed as scary places, full of scary people and problems? Certainly. However, there’s a new public relations campaign, which has emerged to fix all such problems. Let’s call it the “Save Africa” campaign. Brought to you straight from Hollywood.

Take the infamous “I Am African” campaign, promoted by the Keep A Child Alive organization several years ago. In the campaign, famous celebrities like Iman, Gwyneth Paltrow, Tyson Beckford, Gisele 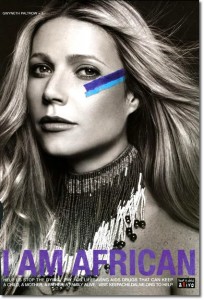 Bundchen, Alicia Keys, Sarah Jessica Parker, David Bowie, Liv Tyler, Heidi Klum and Seal, Lucy Liu, Richard Gere, and Lenny Kravitz all posed in a series of black and white photographs. They were covered in body paint and jewelry, and all proudly proclaimed the words, “I Am African”. Scientific debates aside, I’m not quite sure that throwing on some war paint and traditional tribal jewelry makes one African. As for the writing at the bottom of each advertisement? “Help us stop the dying. Pay for lifesaving AIDS drugs that can keep a child, a mother, a father, a family alive.” Wanting to help fund research and life-saving drugs for HIV and AIDS is one things. However, is it really necessary to use lines like “help us save the dying?” By using such terminology, it permanently plants an image in the reader’s mind of a continent in despair.

The problem is that with such campaigns, like the “I Am African” campaign, cultural stereotypes are allowed to be perpetrated. It is true. Countries within Africa do have their fair share of problems. But doesn’t every country? On every continent? Time and time again, the truth remains the same. The best way to build up a society is through empowerment. It’s not through aid. Or celebrity endorsement. It starts with the local people.

It’s a tough issue to deal with because some celebrities do have the best of intentions. While others might do charity work simply as a public relations stunt, most truly want to make an impact. Many are moved by a personal experience that they had while traveling within Africa, or have a story, which has touched their heart. The problem is that in the American media, such stories of celebrities traveling to the countries of Africa to save the local populations, are the only images that are ever shown. The narrative remains the same. The Western world is always the one who comes in to save the day. The countries within Africa are treated like troubled children, who need to be taken care of. You never hear 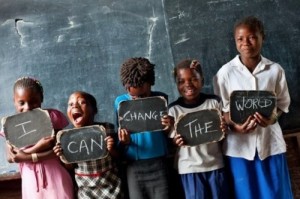 a news story about a local citizen building up the school system in his community or improving the local economy. However, American news stations are filled with reports of Angelina Jolie adopting a daughter from Ethiopia. Or of Carrie Underwood singing “I’ll Stand By You”, as she is surrounded by children from a rural village in Africa, which was shown on the sixth series finale of American Idol. Or even when the Bill and Melinda Gates Foundation gives extensive donations to charities within Africa in order to eradicate malaria, among other social needs. The message is always the same- the West always has to be the savior for the weaker African countries. It’s cultural superiority at it’s finest.

Africa does not want to be saved. Africa does not need to be saved. “Saving Africa” is a figment of the American imagination. It plays into our fantasy of always needing to be the one to save the day. It’s time to end the “Save Africa” public relations campaign. Local empowerment, not celebrity endorsement, is the key to improving a society. What many of the countries of Africa need is simply the opportunity to work together, as local citizens united with global partners, to ignite change in their communities. They need to be given the chance to stand up on their own two feet, not to be pigeon-holed into a corner, forever stuck in the role of the troubled, younger sibling, who can’t stand up for himself.