Renewable energy is the wave of the future. Eliminating our dependence on fossil fuels and relying solely on renewable energy sources would be a boon for our environment unlike anything we have ever seen. However, even the United States, a very advanced nation, only satisfies 11% of its electricity needs through renewable resources. Simply put, we have a very long way to go until we eliminate our dependence on fossil fuels.

In order to increase our renewable energy output, scientists are constantly trying to develop new and improved technology. In the quest to create new green technology, we often produce complex creations. While these creations are great and beneficial, I strongly believe that our simple-solution tank has not yet been tapped.

The inspiration for this article comes from a 13-year-old boy named Aiden Dwyer. Aiden invented a unique arrangement of solar panels that mimicked an oak tree in accordance with the Fibonacci series. Basically, he 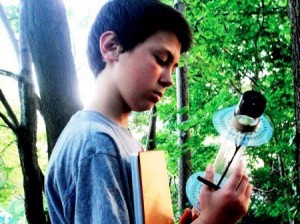 took already known existing patterns in nature and applied them to solar panels, hoping that this would produce more energy than traditional flat solar panels.

At first, Aiden received national media attention because his findings claimed that his creation was significantly more efficient than traditional flat panels. However, it soon became known that Aiden mistakenly measured the wrong data, and his invention was no better than flat solar panels. In fact, his entire theory of utilizing the Fibonacci series was proven faulty.

While Aiden’s creation, unfortunately, proved to be a bust, his inventive thinking is exactly the kind of vision our world needs. As I learned of Aiden’s story, I began to think of my own ideas on simple ways to improve renewable energy technology. I thought, “Why not make a solar panel that follows the sun’s movement throughout the day, in order to maintain an optimal angle?” After a little research I discovered that this was a great idea. However, it is already commonly deployed, under the well-known name, solar trackers. These devices utilize a motor in order to rotate the panels, and produce up to 40% more energy than traditional non-rotating panels.

As I poked around the Internet, I discovered an invention called the SunSaluter. The SunSaluter is a solar tracker that does not use an electric motor in order to rotate the solar panels. Rather, it works off of a system that uses 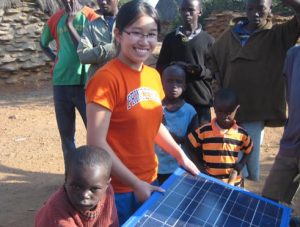 ambient temperature change to rotate the panel. It is made from recyclable materials and costs only $10 to produce, while traditional tracking motors cost on average $600. When fully installed on a residential home, the SunSaluter will cost a total of $200, 1/6 the price of a traditional tracker. Furthermore, it is simple to construct and can be applied to already existing panels, making it perfect for developing, as well as developed nations. Because of its simple and intuitive design, the SunSaluter requires 75% less maintenance.

Eden Full, a 19-year-old former mechanical engineering student from Princeton University is the inventor of SunSaluter. Like Aiden, Eden utilized a relatively simple concept in order to generate a new and constructive idea. Fortunately for Eden, her invention – unlike Aiden’s – is proving to be a huge success. The SunSaluter has blossomed into a full-blown business called Roseicollis Technologies Inc., and Eden has been the proud recipient of numerous accolades.

My point in highlighting both Eden and Aiden is to show that these two brilliant people are fantastic exemplars of the type of thinking that our world can so greatly benefit from. Regardless of their successes or failures, both of them took imaginative, yet simple, ideas and tried to make them work. The only difference is that unfortunately Aiden’s idea did not pan out the way he had hoped. But, failure is always part of inventive processes, and Aiden’s thought process is incredibly encouraging. Therefore, I believe that both Aiden and Eden should be admired for their creatively entrepreneurial spirit.

Don’t get me wrong, advanced technology is awesome, and proves time and again to be incredibly beneficial to our world’s environment. However, simplistic concepts still hold tremendous value for our environment… as the SunSaluter so aptly highlights. Eden’s invention uses fairly complicated technology in order to make the panels mechanically rotate, but the concept is something even a young child could understand. So while we continue to advance our technology, we should always keep in mind that creations such as the SunSaluter often stem from elementary ideas. People like Aiden should not be rejected because of his failure, but should be celebrated for his creative mind.

Here is a short video of Eden’s presentation as part of the Start-up Challenge at the Social Good Summit in 2011.