When we think about the core of America, what do we think?  Maybe the core of America is hard work, commitment to family, or values like freedom and liberty.  There are a lot of things in our American society that link us together to core American standards.  In recent years, the idea of a “core” has been extended to 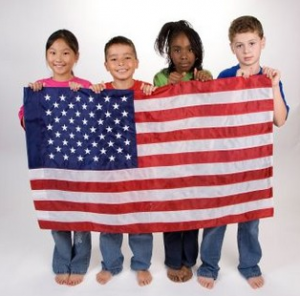 education.  With a common core of standards for students, children across the country will be linked by the same curriculum and expectations in their public schools.

The Common Core Standards Initiative calls for a uniform curriculum for students grades K-12 in all fifty states and the District of Columbia.  The goal of the common core standards is to ensure that all students are being prepared by their public school for entry into a secondary education institution or into the workforce.  The movement for common core standards has been circulating throughout the country for twenty or so years, usually referred to as the “Accountability Movement”.  Educators and policy makers realized the need for state-by-state education to be more standardized.   The National Governors Association and the Council of Chief State School Officers sponsored the movement.

Several reasons motive this movement including the U.S.’s falling position in world rankings in education.  This grander plan for the U.S. to keep its competitiveness as an economic super power is incredibly relevant in the education sector.  Without excellent education, U.S students will not be able to compete with the world’s rising developing countries.  The common core standards will ensure that students from different states will all be prepared not only for high school graduation but for college or a professional career.

These common core standards would definitely have helped me out when I entered college.  I so often found myself saying, I never learned this in high school! When students come from different standards in high school it is not only challenging for college admissions persons to compare one 4.0 GPA to another, but it’s also hard for students from totally different educational backgrounds to study in the same classroom.  While my public high school in central Pennsylvania had a really successful writing program, we did not have a probability and statistics class, so my freshman year of college I sat bored through my University Writing program while I struggled with my Statistics.

When I studied abroad at the University of Cape Town, South Africa, the importance of common standards in their university curriculum became extremely evident.  In my upper-level microeconomics course, all the South Africans had been tracked on a specific combination of calculus and economics courses.  Being an outsider, I did not have these same courses and was therefore highly confused when the professor referenced specific speakers or lectures that I had never been a part of.

I’ve seen how some commonly established standards could specifically help establish a more equal playing field in college courses, but in general, the common core standards system is met with wide criticism.  The common core standards apply to basic subjects such as Math and Language Arts from grades K through 12.  One of the most prominent concerns with such a program’s development is the lack of attention it pays to English Language Learners.  By standardizing such things as reading comprehension skills, children that are coming from a non-English speaking home are placed on the same standards as children who have been exposed to English since birth.

Stanford assembled a team of English-language learner experts to create teaching resources for teachers trying to adapt the common core standards to be taught to English language learners.  The group launched a website Understanding Language this week to assist teachers around the country with understanding the complexities and difficulties English Language Learners will face when trying to meet the common core standards.

With the changing dynamics of our country’s demographics it is important that our education system is appreciating the changes and adapting to accommodate all children of our country.  When so many children are trying to adapt to a totally new language, it is unrealistic to expect them to perform at an identical standard as natural English speakers; however, it is our responsibility to demand high, achievable standards for all our students so that everyone in our country is prepared for high school, college, and the professional workforce.

Extended resources to teachers to assist them in the specialized teaching methods for English language learners can really help lessen the disadvantaged position these students find themselves in.  We need more of these resources as well as more attention paid, on the policy end, to the growing diversity and needs of our students.