Last week I stumbled upon a news event that had to do with one of the most controversial issues in the U.S: abortion.  The latest news on this issue has to do with the controversial Virginia anti-abortion legislation, which has created many protests, especially in the state Capitol.  Basically, putting in the simplest of terms, the legislation meant that any woman in Virginia who wanted to have an abortion had to have an invasive, 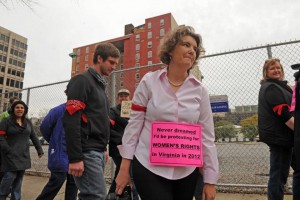 transvaginal ultrasound that would be held in her medical record at the abortion facility for seven years.  The bill was one of several that dealt with abortion procedures, including one that was called the personhood bill, which would have defined a fertilized egg as a person. One of the other bills would have refused government-funded abortions to poor women whose fetuses have gross mental and physical abnormalities.  You can already see why this would create such a controversial uproar on behalf of pro-choice advocates everywhere.  What’s ironic about these bills is that Republicans, who are often viewed as protecting civil liberties and promoting limited government intervention, passed these bills.

Is it too far fetched to say that this is direct government intervention?

The transvaginal ultrasound bill was later watered-down to make it “optional” to women and the other two bills were killed.  Yet what is so shocking is the fact that these bills were created in 2012, thirty-nine years after Roe v. Wade declared that the Fourteenth Amendment to the United States Constitution be extended to a woman’s right to decide to have an abortion.  What I think is happening here is that there is a battle of differing beliefs that are surpassing some of the basic rights that are given under the U.S. Constitution.  Because times have changed, there seems to be a need for more control over traditional religious views, especially dealing with abortion.

However, I want to point out that the government’s job, and hence the politicians that represent the government, are not primarily here to push their views on the people.  Whatever views each person has, first and foremost, are protected by the Constitution, and one of these views protected is not only pro-life but also pro-choice.  My point here is not to persuade anyone with my point of view (I leave that to the more fervent advocates), but to point out that something as controversial as abortion should have a common ground of civil liberties.  Whether it 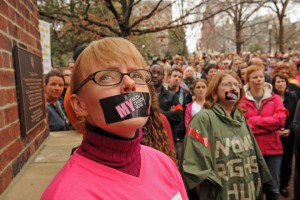 Obviously the view on abortion has to do with personal preferences, but what I want to emphasize is that whether you believe abortion is right or wrong, we should all agree that our civil liberties should not be jeopardized in any way.  Sure, abortion might not even be a concern of yours, but civil liberties and the right to them should be everyone’s concern.  The main reason why these bills were protested and killed was not because pro-choice advocates believe that abortion is morally good, but because people believe that we should have the power to make choices for ourselves.  It goes beyond the perspectives of individuals because the law is not made for the individual person, but for the people as a whole.  What we do within the limits of the law is the freedom that each of us has as a citizen.  And when the laws squeeze these limits tighter, our freedom becomes less and less accessible.  Each of us chooses whether to be here online, reading about articles such as these.  If someone thought it were morally wrong, would it still be justified to restrict us from choosing to do so?  Especially in 2012 in America?