Women’s rights have constantly changed throughout the history of the United States. For the most part they have improved. We’ve seen voting rights, employment rights, and equal rights in general surge from movements and hard work, making women a prominent part of society. Even though it has taken so much effort to get to this point, I still think that our country deserves some credit for this progress. While unequal rights are no commendable situation, and it’s sad that the problem still exists, it is somewhat reassuring to know that progress 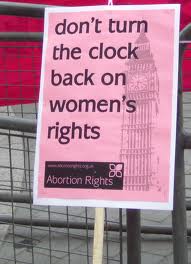 has at least been made. However, the track record of improvement in women’s rights has recently taken a step backwards.

I’m going to talk about abortion laws in this post, but I want it to be clear that I’m not focusing on whether or not abortion is right or wrong; I want to stay out of that arena. What I want to talk about is the recent uproar about new abortion laws and amendments and how they are affecting women’s rights. What I would like to discuss, specifically, is the Kansas amendment that gives doctors the right to withhold information from women regarding the health status of their fetus.

Much debate has been going on recently regarding abortion rights, as I’m sure everyone has seen or heard. What started as a right to choose has brought on fights to require sonograms, waiting periods, and more. The battle is unending and exhausting. In the end, though- after making it through all of the added technicalities, it is still generally a woman’s right to choose whether or not she wants to have an abortion. With the amendment passed in Kansas, though, I do not necessarily think that this is the case.

What is happening now is that doctors in Kansas are protected by law if they do not give accurate and full information to women about the health of their fetus. In other words, if a doctor had information that might make a woman choose to have an abortion, that doctor could not legally be punished if they withheld that information. Say, perhaps, that a doctor found out that if a woman went through with her pregnancy, her child would have a fatal disease with no chance of surviving past its first day after birth. If the doctor sensed that this information would drive the woman to abort the fetus, there is a chance that they could withhold it. Essentially, women now have to question whether or not her doctor is fully informing her. Women are not being trusted to make their own decisions. Women do not have the right to know about something that could potentially dramatically impact their health, physical or otherwise. In this sense, women are losing rights.

In discussing this topic and solely focusing on the aspect of women’s rights, I think that this is wrong. In fact, I think it’s wrong on multiple levels. Doctors should not be protected from lying to a patient, no matter what. We’re now moving from a woman’s right to choose to have an abortion, to a doctor’s right to choose whether or not to inform his patient. How, in any way, should this be okay? Additionally, I think it’s safe to say that women are being degraded in this scenario. The politician who proposed the amendment is taking away trust in women to make a fully informed decision. 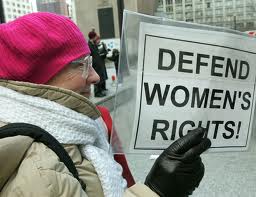 I believe that this is a huge step backwards in regards to women’s rights. We should be allowed to make health and physical decisions for ourselves; the law should not allow us to be lied to by people whom we generally have no choice but to trust. I think that Americans need to take their minds away from unendingly deciding whether or not abortion is okay. Instead, they need to seriously assess how women’s rights are affected when we no longer have access to truthful information. With abortion being as hot of a topic as it is, I think that focusing on constantly progressing women’s rights will be the best way to go about not letting them digress even further. So instead of holding strong to your stance on abortion, why not consider your position regarding whether or not it should be legal for women to be lied to? That should be the issue at hand.