The world’s largest refugee camp turns 20 years-old this week. The Dadaab in Kenya welcomes approximately 1,300 refugees a day and is currently a haven to almost half-a-million people escaping war-torn neighboring countries like Somalia. Originally designed with a capacity to hold 90,000, Dadaab, located about 60 miles from

the Kenya-Somalia border was only meant to be a temporary fix to some of the victims of civil wars in the African continent. Unfortunately, because of continued strife in the region, it has now become the only home known to some.

There is a generation who was born and is now being raised within its borders. According to U.N. data there are 77,246 children below 5 in the camp. Also, not all of the people living in the camps arrived there as refugees. The compound is also home to some 10,000 third-generation refugees whose parents were also born in Dadaab.

While the United Nations and non-governmental organizations running the camp do an extraordinary job of providing educational programming and training, it does not compare to life on the outside. It can be argued that because of the violence in their villages and hometowns, children, in particular, would not even have a chance to receive an education if not for Dadaab. However, I argue that there must be a social and developmental impact on the children, their families and communities who have learned to thrive inside the camps, but have not had the experience of living outside.

Refugee camps, in general, are generally set up quickly to take care of an escalating conflict in the area. They 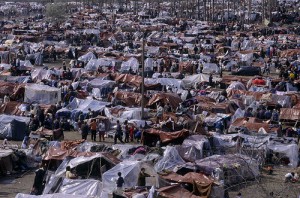 are usually designed to only meet basic human needs and for a short period of time. Most camps include sleeping quarters such as tents, hygiene facilities for basic cleaning and washing, make-shift medical services to oversee any health conditions and prevent rampant spread of disease, communication equipment like radio, and most importantly to provide physical and mental security.

While this seems like a respite from the conflict on the outside, it is not meant to be a substitute to life beyond Dadaab’s borders. Refugee camps serve a solid purpose and are truly necessary, but I do not believe people should spend a lifetime there. My belief is that there is a negative impact of having people born and raised in refugee camps, and we need to explore what we need to do to help them transition back to life outside, in this case beyond Dadaab.

In researching the consequences of living long-term in a camp, I found very little information. I did find information on some of the negative effects of living within the camp, including susceptibility to diseases and malnutrition, vulnerability to sexual abuse, and an increase in depression and anxiety to the unknown. So while there is little information on the impact once people leave the camps, there is data showing that camps are only meant to be a temporary step and long-term exposure is not recommended.

The UNHCR, or the United Nations Refugee Agency, recently launched new measures in an attempt to address some of these challenges and strengthen the impact of its work in Dadaab. Further, the agency and its partners are continuously looking at ways to improve the delivery services and assistance to residents of the camp. Because the reality is that until there is an improvement on the political and economic situation in the region, Dadaab is the only home to more half-a-million refugees. It also looks like this is not a temporary stay. In the meantime, I encourage the United Nations and partners to not only look to improve the short term situation for refugees in the camp, but also to work with the regional governments to examine and improve the long term outlook for the vulnerable population living in Dadaab.