My first memory of rejecting societal gender roles was when my mom sent me to school in pig tails one morning. These pig tails were bad, too. They stuck straight out from the sides of my head and had bows, and my mom insisted that I wear them. Even now, almost 20 years later, I can remember how much I pleaded and argued with my mom not to make me wear them to school. I tried explaining to her how much teasing I would receive and how much I simply despised pig tails. For some reason, though, my mom would not budge on the issue. In spite of all of my 5 year old reasoning with her, she thought they were too cute to take out.

As I grew up, I encountered many experiences like this. Wearing dresses, being covered in pink, playing with dolls, and not getting dirty at recess were just a few of the gender roles that I fought with. I never understood why I wasn’t allowed to wear what I want or play with the toys I liked. I could find no reason for not being able to compete on the all boy baseball team in elementary school, or why I had to wear a skirt to play lacrosse in middle school. Why did the YMCA want me to play softball, when I could clearly throw a hardball? Why couldn’t I wear shoulder pads and a helmet for lacrosse and play rough like my brother and his friends?

Gender roles are everywhere. They have molded and changed over time, but unfortunately have not disappeared. To make it clear, a gender role is a socially accepted norm for people of a certain sex. For example, boys play with action figures, robots, and sports equipment; girls, on the other hand, spend time 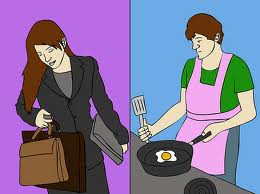 brushing their doll’s hair, dressing up their Barbie, and practicing their brownie making skills with an Easy Bake oven. As boys grow into men, their role is to be a provider, maintain a tough outward appearance, and “bring home the bacon” for his family. As girls grow into women, their societal given norm is to know how to cook, take care of their children, and often times become slightly more emotional than is necessary. To reinforce these roles, take a look at yourself, perhaps, or other men and women in your life. It is safe to say that many of them likely fall into these roles, be it your mom, dad, grandparents, or siblings.

Like I said before, gender roles have changed as our culture has changed. We have more single parent households now, as well as more same-sex parents. To get by, these people have had to take on jobs and positions that traditionally fall outside of the norm. However, due to the fact that gender roles still persist, I think that it is actually harder for these families to strive in our current society. Women see unequal pay and people are afraid to express themselves as they truly see fit. Men are given separate standards and are seen as weak if they do not reach them.

Changing and out-dating gender roles has the potential to create a more stable and equal society. By not providing your daughter with a doll to take care of, but rather allowing her access to generally “male” toys as 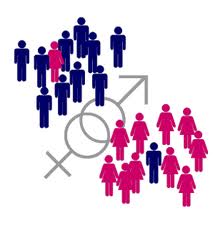 well, she might not see her future as being a housewife. Instead, she might envision herself as the CEO of a Fortune 500 company. Instead of giving your son a toy soldier to play with, but providing him with a toy cooking set, too, he might not envision himself fighting in the army later in life. Instead, he might be more open to being a stay at home dad once he reaches adulthood; he might not even see this as going against the norm.

I think that parents, schools, teachers, pastors, or any other person who has a potential influence on a child should make a conscious effort to open up that child’s mind. By training them as children to take on certain roles, parents, mentors, and guardians might be hindering their options or success later in life. Stay at home dads are typically viewed in a negative manner, but why? Female CEOs are often seen as demanding or unfair, even though receiving the same treatment and management from a male would not even raise an eyebrow. By taking away gender roles, these possibilities could someday be the new norm. How do you envision a future with no gender roles?