The UN on Human Rights

The Human Rights Council, a part of the United Nations, is made up of 47 states that are all to be looked at as examples responsible for ensuring and strengthening universal human rights. The UN General Assembly created the council in 2006 in hopes of greatly improving and instilling the values that are listed in their 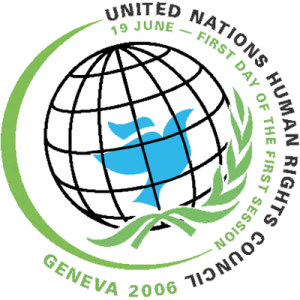 Universal Declaration of Human Rights. Before 2006, another council, the United Nations Commission on Human Rights, was in charge of these duties. This council, however, was repeatedly criticized for including member states that continuously violated the very human rights that they were being held accountable for protecting.

The new Human Rights Council (HRC) developed a Universal Periodic Review that is meant to help them in the process of assessing each UN member state on their human rights practices. The review is meant to enhance cooperation for the promotion and protection of human rights, it should reflect the principles of universality and equal treatment, and should fully integrate a gender perspective. While these all seem like positive guidelines, I can’t help but notice that some of the HRC member countries might not be the best ones to instill human rights values around the world. The UN apparently created a new council to push out its contradicting member states, but I cannot help but criticize a couple whom currently hold positions in the group.

Saudi Arabia and China are both on the UN Human Rights Council. In 2011, they were also both on Freedom House’s list of worst human rights offenders. Wait a second…if they’re the ones pushing for human rights around the world, shouldn’t they be setting a positive example with their own people?

Amnesty International, a watchdog for global human rights, includes criticisms of both Saudi Arabia and China in their country database. A brief introduction to Chinese human rights violations includes the country instilling the death penalty for non-violent crimes. On top of this, though, an extremely high amount of Chinese citizens are consistently detained (sometimes illegally) without a trial. Additionally, authorities currently control the internet and restrict international news, record individual’s internet activities, and block free expression on numerous social media websites. Moreover, you might remember hearing something about an overwhelming number of selective abortions in an attempt for families to only birth male babies. It’s safe to say that men are given much better treatment than women in China.

Saudi Arabia is a worse human rights violator than China. Freedom of expression within the country is greatly suppressed and people are consistently given unfair trials. Discrimination against Saudi women is not even comparable to those in China. The Saudi Arabian government does not allow women equal employment opportunities, they are banned from driving alone, and they cannot pass their own nationality down to their children if the father is not a Saudi Arabian national. There are also frequent reports of torture within the country.

How can the UN include human rights violators, the WORST violators at that, within their council to protect said rights? It angers me that such mistakes are being allowed to happen. I do not mean to say that either of these countries is not working to improve certain aspects of human rights for their people. Situations have improved over the years, and it seems that rights are continuing to improve with time. However, I am against the UN letting these countries assist in “fixing” other countries before they themselves have granted full human rights to their citizens.

Another point I want to bring up is the fact that the United States also holds a spot in the HRC. Upon first reading the list of member states, I did not think twice about the US’s presence. However, is the “world power” I call home even the best country to be leading the battle for human rights around the globe? In looking at the conflict that is Guantanamo Bay, I would say not. Holding hundreds of prisoners captive, based on thin evidence, and not giving them fair trials definitely goes against our granted human rights. Furthermore, statements have come up in the past confirming that torture has in fact taken place within the detention camp.

I am not sure if the UN simply needs to re-evaluate their member selection criteria, or if they should re-think their values altogether. The HRC does not have a solid foundation, and I do not believe that any country should be directed to correct itself by nations that are feeding them hypocritical changes and solutions. Yes, some countries may have more severe offenses against human rights than others, but when it comes down to it, any member country with violations should not be put on a pedestal to be admired by another.

How can we progress without strong leaders? How will women escape degrading treatment when our role models do not even allow them to drive? How many more innocent people will be sentenced to death due to unfair trials? The fight for human rights goes on.