The education system in Cambodia used to be the envy of most other Asian countries. Going as far back as the thirteenth century, Cambodians have valued knowledge and schooling and the power that they bring with them. In pre-revolutionary times, six levels of grade school existed, followed by four years of what would be the equivalent to junior high, and three years of “high school.” Children and youth studied concepts and foundations of religion, literacy, and trades that would benefit them in their everyday lives.

In the 1970s, disaster struck. The Khmer Rouge took control of Cambodia and war 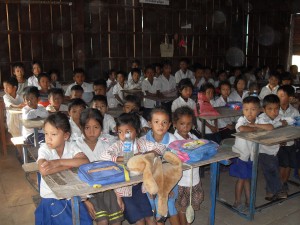 broke out across the country. Books were discarded. Pages were used to make cigarettes. Teachers were targeted and killed. The education system took a huge downfall and few children were receiving even the lowest standard of schooling. When the storm clouds dissipated and growth looked like a distant possibility, education was not as much of a priority for the Khmer people as was simply surviving.

As the years passed and rebuilding the country and the economy began, education was focused on again. By 2005, in fact, primary level education in Cambodia was at a surprising 91.3 percent. Unfortunately, lower secondary education was only at 31.3 percent, and upper secondary education at 11.3 percent. However, the Cambodian government has recognized the significance of education access to its youth, concluding that without it, the economy will never again strive. With that note they granted nine years of free education access to every child in Cambodia. While the country still heavily relies on foreign aid for their education system, they also agreed that if a school was built anywhere within their borders, the government would supply the building with a teacher. At first glance, it would seem that Cambodia would be seeing great increases in their system. So why, then, is the country still struggling to stay above water?

Yes, teachers populate the worn school houses in Cambodia, but the student to teacher ratio is generally ridiculous. Children cramp themselves into classrooms to be taught by undereducated and underpaid staff, and the teachers often end up finding outside work to subsist themselves, taking their attention away from the children. On top of this, 26 percent of youth in rural areas have had to repeat at least one grade level. Only 1.2 percent of the entire population goes on to obtain an upper education.

Even though the government has a vision for the education system, I believe that the allocation of their assets is a huge part of the problem. About 2.3 percent of Cambodia’s spending goes toward education, which falls behind neighboring countries. Additionally, the amount of private spending that the public contributes to attain education is almost the same as what the government spends. Yes, the Kingdom of Cambodia has granted education access to its citizens, but it is not enough to simply rely on the promise.

Primary schools have seen great improvements in enrollment rates, but secondary education is still struggling far behind. I believe that more spending should go toward junior and high school level education if Cambodia wants to see an improved economy. Primary school is still obviously important, but without more of the population achieving upper education, Cambodia will have an extremely difficult time thriving in today’s world.

On top of allocating more money to secondary schools, I think that the government should increase the education budget in general. While I do understand that Cambodia has many other areas that require attention, education is literally the key to improvement. Without it, the country will maintain a state of limbo indefinitely. With a larger budget for schools, I think the education system would progress if teachers were given bonuses or slight pay increases with improved results in their classes. This would benefit both the students and the teachers. Other needy areas might need more attention with a smaller budget in the short run, but over time the spending on education would actually pay for itself after higher educated individuals contribute to the economy further.

As I said before, Cambodia already relies greatly on foreign aid. By focusing on the type of support that they receive, I think that they could improve their education system and strategize an exit plan for a number of organizations. The Nanubhai Education Foundation runs an effective program that I discussed in a previous post. The nonprofit sends trained individuals to schools in rural areas in order to train the local teachers. The program is sustainable with potential to continue to grow once the organization pulls back. If those in charge of the education system reached out to a nonprofit like Nanubhai, the government would be able to lessen its reliance on other, less sustainable organizations, and strengthen its education base.

Cambodia was once respected for the education that it provided its citizens. The scarring time of the Khmer Rouge unfortunately robbed the struggling country of that honor, though. With smart spending allocations and strategic relief tactics, though, I think that the education system in Cambodia could potentially be greatly improved.