Two-thousand eleven changed the status of the virtual world. It went from being a privilege of a few to being declared a human right. Traditionally, human rights were defined as those essentials that every individual in this globe should be able to access.  This list included clean water, food, clothing, housing and shelter and others such as liberty, freedom of speech and education. Late last summer, the United Nations declared the internet a universal human right and a basic need for all.  So how did the 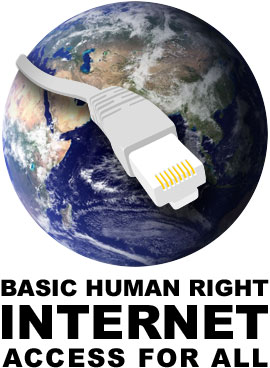 Over the last two decades the World Wide Web has risen to hold a prominent place. The latest technological strides and fast developing advances have made it so that we have become dependent on its use for our daily interactions.  Whether it is use to stay connected, for business transactions or facilitate everyday functions, the internet has become indispensable.

It is understandable how we would feel that it is a need. But can we compare it to a necessity as important as food, shelter and water?

This new elevated status has not come without debate. While all do agree that there is a relationship between the internet and human rights, there is a clear divide between those who agree with the role of technology as a right and those who do not.  Some argue that technology was the key to success to the Arab Spring in the Middle East and that it helped expose human rights violations.  They also contend that it helped give people their due rights in an oppressive region led by restrictive regimes.  However, they express that technology served as instrument for change not as the end goal.

In an op-ed in the New York Times by Vinton Cerf, a vice president and chief Internet evangelist for Google, he makes an argument that it isn’t a human or civil right. He uses the analogy that at “one time if you didn’t have a horse it was hard to make a living. But the important right in that case was the right to make a living, not the right to a horse.” By this he means that technology is more of a tool in the fight for universal human rights, not a right in itself.

Others, like the United Nations (UN) have publicly declared that it is as basic right for all. The argument stems over the fact that regimes thwart people’s rights of speech, freedoms and movement and that they have done the same over the use of the internet and in so restricting a right.  Some specific examples are China and Cuba where the government curbs its citizens’ right to access certain sites and monitors the users’ virtual movements.

The UN also believes that the internet’s role in combating inequality, aiding in development and unifying the world during a time of globalization makes it essential. The internet has been called revolutionary because unlike television, printed publications and radio it invites communication between two or more people.  It also allows for it to be done quickly, cheaply and at times anonymously. While the UN promotes the universal use of the internet, it understands that over 4 billion people around the world still have limited to no access to this technology. They do encourage all member states to make this as important a priority as the freedom of speech and communication.

Both parties have valid points.  Also, they both recognize the importance of this technology and its usefulness. It’s the degree of its significance that varies. I believed that research would help me clearly pick a side; instead, I find that each side has compelling reasons and justifications to support their case. So what do you think? Should we redefine human rights to include the internet? Is it as important as some of the other things considered a human right? Could it be a right in the developed world but not as much as a necessity in the developing one? Please share your thoughts.