In my blog post last week I addressed the history of the Lords Resistance Army (LRA) in an effort to show who they are and what this organization is doing in Uganda and other countries in Africa. I hope that I was able to convey that the LRA are not, as Limbaugh seemed to think “Christians… fighting the Muslims in Sudan”. While I hope that I clarified what the LRA are, I was still left with questions about our administration’s decision to send troops to the address ongoing issues surrounding the conflict. Why now? Why only 100 peacekeepers? What can they actually accomplish?

I would like to take my lesson one more step in a brief clarification of what the troops will be doing on the ground. According to the exact memo written from the White House, the teams are “combat-equipped…headquarters, communications, and logistics personnel…These forces will act as advisors to partner forces that have the goal of removing from the battlefield Joseph Kony and other senior leadership of the LRA. Our forces will provide information, advice, and assistance to select partner nation forces.” While these soldiers are ready for combat, they will be in predominantly advising and educating roles as opposed to front line violence. Only if they are directly attacked will they employ force. I feel like this is an important distinction to make between this situation and the role of our troops in other parts of the world who are facing extraordinary daily violence.

The decision to help Uganda against the LRA has been in works as early as 2008, so this decision is not entirely out of context. Back then Invisible Children hosted Lobby Days for Northern Uganda, which grew through May of 2010 where a finalized bill was sent to Obama’s desk signed by 267 members of Congress. This was the most cosponsored bill with a focus on an African issue as far back as records show. The LRA Disarmament and Northern Uganda Recovery Act passed by the House and Senate unanimously, with support from both parties.

This begins to answer my questions why Obama decided that it was time to begin addressing his promise to send troops. However, the successful history of this bill has 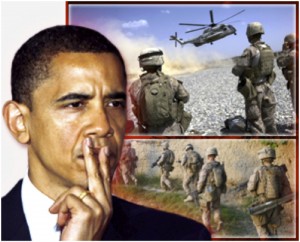 not translated into full bipartisan support today. Senator John McCain was quoted on the topic of looking back towards failed peacekeeping missions in Lebanon and Somalia, warning that they resulted in outcomes that we had never intended.  I fear that because we are in the midst of a Presidential race, this timing may not be the most opportune.

Even for people who are well versed on the background of the LRA, I think Obama will be criticized for his decision to send only send 100 people to Uganda. One side will say that 100 people are already too much for a nation America does not see as politically powerful or threatening. However, others will say that 100 individuals are nowhere near enough to tackle the jungle comprising lands in three nations in the search of one person.  In my opinion, I feel as though Obama is safe in sending only 100 troops initially. If the decision is reached that more are necessary, I am sure more soldiers will be made available. The only caveat to this would be if a public outcry erupts from our countrymen being put in harms way. However, with all surrounding countries in agreement towards a common goal hopefully the US troops will find support from all fronts because Kony will inevitably try to slip away through neighboring borders

If this resistance to sending troops becomes the case before the 2012 election, then I know this will be manipulated into a key issue for the Republican candidate to capitalize upon. Again, this leads me back to my question of why Obama has chosen this time to follow through with this law. After all, the US has shown no pressing desire to fight the LRA for the last 20 years, why do they need to rush it before next November? My only response to this decision is that Obama is hoping that this proves to be a short and successful mission. If he predicts this will be a brief task then this will be another feather in the hat of accomplishments for the President. If this becomes a long drawn out mission, then the length of fighting will be the least among his worries for his reelection campaign.

Over all, I am happy to hear that President Obama has followed through with his promise to address the LRA. While I would argue that he might not be sending them at the right time (with the current outcry and focus over bringing our troops home from the Middle East as well as the current budget mess) I think that his humanitarian aims are in the correct place. Similarly, I think he was smart in only sending 100 troops. Without setting a timetable, he can always send more after initial assessments are made, and similarly there will be less pressure or focus when only a small number of solders remain abroad.

I think that no matter how this mission to Uganda turns out, we will look back on it as an important legacy from Obama’s administration. With a humanitarian goal, it will either be a great success, or he will loose in the reelection with having initiating something good. While the debates will continue to circulate about whether we are doing it for oil or political power, I believe that this mission of bringing down the LRA is a promise that President Obama sees as worth addressing. After all, there is no shortage of grievances with regards to his undelivered promises. Lets just hope that this promise is a successful and succinct one.