The first blog that I wrote for the NotEnoughGood website focused on the over-sexualization of young girls in the media.  Specifically, I was concerned with the way dolls, commercials, and television shows portrayed girls, and how this image affected them.  However, the reality television series, Toddlers and Tiaras, has gone above and beyond with highlighting how easily a six year-old girl can be transformed into looking like a mini twenty-something year old woman.  The young girls followed on the series 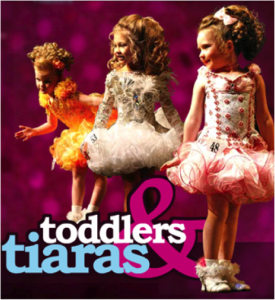 do everything from spray tanning, eyebrow waxing, and getting extensive hair treatments in order to win top numbers in beauty pageants.  Regardless of what the parents have their girls go through for the sake of winning, the question is: how much is too much?

Toddlers and Tiaras has attracted a certain degree of controversy, and most of the divisive debate about the show has to do with some of the outfits the young girls wear.  Recently, a few episodes caused an uproar due to some of the outfits the mothers decided to put their daughters in for the shows.  In one episode, a four year-old girl was put in a Dolly Parton outfit, complete with padded bra and butt enhancements.  Another episode followed an equally young competitor who participated in the pageant in Julia Roberts’ prostitute outfit from the movie Pretty Women.  The outfits for the girls in the show not only include over-the-top costumes, but also overly teased hair, spray tans, copious amounts of makeup, and flippers, fake teeth to cover up any gaps caused by lost baby teeth.

The outfits and accessories that go along with the beauty pageants put an exorbitant amount of pressure on young girls.  According to Mark Sichel, a licensed clinical social worker, the outfits and items such as flippers cause girls to question why they cannot compete naturally.  In other words, they wonder if the only way someone will think they are beautiful is if they hide any flaws they might have or portray an overly sexualized image.  The Parents Television Council, a watchdog group, also criticized the outfits of the young competitors, stating their concern about the over sexualized image of these young girls has gotten out of control.  Of course, the mothers of the competitors responded by saying they were upset by the criticism, but felt that their daughters were competing in a sort of sport and that the outfits simply went along with the sport.  Furthermore, they spoke extensively of how their daughters enjoy competing, and that the uproar over the show is a bit unnecessary.

Beauty pageants have been around for many years, and the adult pageants have their own controversies to deal with.  However, the fact of the matter is that a young girl, being dressed like their adult counterparts, is a shocking and horrifying social statement.  In order for young girls to grow up with a healthy self-image, they do not need to be paraded around like adult Barbie dolls because that overtly sexual image will stick with them for years to come.  Whatever older women do in beauty pageants is their own business because they are adults who can make their own decisions.  Little girls do not have the ability to make their own decisions, and they do not understand the implications of wearing such outfits, getting spray tanned or wearing flippers.  For that reason, I believe it just makes sense to end the beauty pageant business for young girls in order to keep them from being judged, and depicted, like adult women.