Voluntourism: the Good and the Bad

Are dogs really man’s best friend?  As a dog owner of two, I would say so.  The unconditional love and excitement they share is hard to find elsewhere.  Every time I walk into my house from a bad day, I can always rely on their wagging tails and slobbery kisses to put a smile on my face.  Perhaps, this is why they are increasingly being used to aid victims of abuse not only in their recovery efforts, but also in providing them the strength and support to testify in court against those who have harmed them.  I came across a story yesterday that touched my heart and had me contemplating how the unique characteristics of dogs can reach a group of victims that are perhaps the most likely to walk away from testifying in court against their perpetrators—those I am speaking of are victims of human trafficking.

The first judicially approved courtroom dog in New York recently aided a young teenage girl in testifying against her father who raped and impregnated her.  The dog’s 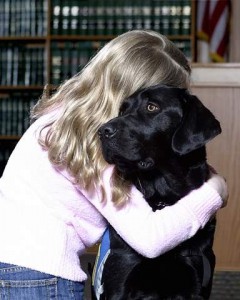 name is Rosie, a golden retriever therapy dog that has been trained to comfort people under stress.  Prosecutors and victims’ advocates are particularly in favor of these courtroom companions, noting that the comfort and support victims receive in giving their testimony can mean the difference between a conviction or acquittal, especially when trauma and threat come into play.  It was observed in the courtroom that Rosie would gently nudge the child witness when she would hesitate and provided “nuzzling solace” when emotions ran high.  By the end of the trial, the child witness’ psychologist stated that the girl was grateful to have had Rosie by her side above all other things during the process.  Her father was found guilty.  Other states are now exploring how they can incorporate similar programs into their courtrooms to aid vulnerable children and adults in testifying against defendants.

Not everyone supports the use of courtroom dogs.  The defense team in the aforementioned case is appealing the conviction.  They argue that Rosie provided an unfair advantage to prosecutors in the case, as the dog’s cuteness unconsciously persuaded jurors that the child witness was telling the truth.  The defense noted that Rosie is trained to provide comfort to anyone in stress, regardless of whether or not they are telling the truth; therefore, can provide jurors with a false impression when deciding on a verdict.  Further, they argued that there is no possible way to cross-examine a dog.  The judge in the case refuted these arguments, stating that Rosie’s presence did no more than provide an emotionally distressed child love and support.  However, it is presumed that the defense’s suggestions will be reviewed and taken into consideration as similar programs emerge.

Since the girl’s case ended, Rosie was brought in to help two young girls who witnessed their mother being murdered.  Similar scenarios have presented themselves across the nation where therapy and service dogs have aided witnesses in providing testimonies regarding sexual assault, theft, and so forth.  The vulnerable state that witnesses are in, combined with traumatic experiences and a fear of being retaliated against, lead me to believe that canine support in the courtroom is a good practice.

Victims of human trafficking are perhaps the least likely group of individuals to testify in court against their traffickers.  Victims of human trafficking are physically and psychologically broken.  They have endured threat, coercion, deception, abduction, and/or emotional, physical and sexual abuse.  They have been stripped of their voice and dignity, being forced to live and work in inhumane conditions against their will.  Every day is a constant battle for one’s life and despair runs deep.  As you could imagine, these conditions create a person who is scared, insecure, untrusting of others, and vulnerable to repeat abuse.

Human trafficking trials are often very long, often taking years while the victim remains in protective custody.  Victims are often forced to confront their traffickers and testify against them in court, reliving traumatizing experiences and potentially becoming re-traumatized.  Many human trafficking perpetrators are linked to larger criminal organizations and victims may receive threats against not only them, but their families as well.

The Trafficking Victims Protection Act of 2000 (TVPA) and its following reauthorizations have made services and resources available to aid victims of trafficking rebuild their lives.  However, one downfall is that victims, particularly adults, are required to testify against their traffickers in order to receive benefits such as the T-visa that allows non-citizens to remain in the U.S. and not return to where they could become vulnerable to traffickers once again.  Many times, adult victims refuse to testify in court, passing on the benefits that are so important in regaining control of one’s own life again.  Further, with child victims, it is often difficult to get them interim services until they cooperate with law enforcement (not necessarily testifying in court) and await “certification” as a human trafficking victim.

Taking all the information provided above into account, I think that therapy and service dogs can be an innovative strategy in bringing about social justice and a great benefit to victims of trafficking.  In doing some research, I found that some organizations have begun implementing the use of these special dogs in assisting trafficking victims, such as Heartland Alliance.  Dogs provide unconditional love and are non-judgmental.  They listen to the commands of those they are helping, which is important in cases involving trafficking victims whose ability to control their lives and situations had previously been non-existent.  Dogs are non-threatening and provide a safe channel of communication that defies language barriers.  Other than aiding in testimony, perhaps one of the most significant effects may be that it shows victims how to trust again.  It can become a life-transformative experience.