Al-Shabaab’s decision to allow non-Muslim aid organizations to once again work in Somalia is great news – but will the good news last?

Every morning when I wake up, I fire up my laptop and check out the BBC’s news homepage. More often than not, the headlines are full of discouraging events, sometimes leading me to wonder why I start my day in such a depressing manner. But every once in a while, I find a headline that helps me start the day off right. Yesterday morning, I found a small headline that did just that. It was entitled, “Somalia Islamists lift ban on aid.”

Before I even clicked on the link, I started thinking about the implications of such a headline. Though I’ve never studied Somalia extensively, I know enough to realize the significance of such an event. Al-Shabaab, the main Islamist group wrecking havoc in Somalia and its neighboring countries, have been waging a war against the Somali government since 2006. Thanks in large part to the weakness of the central Somali government, al-Shabaab, Arabic for “The Youth”, holds considerable influence in southern Somalia. In 2009, they used this influence to ban aid organizations from entering into Somalia to help the people there, claiming that these aid organizations had the ulterior motive of supporting the Somali government against al-Shabaab. They have repeatedly spoken out against the UN and western backed organizations and in 2008-09, al-Shabaab operatives killed 42 relief workers. Clearly, this is not a group with takes lightly the matter of re-allowing relief agencies into the country, so this is a big deal.

Then I thought about the current situation affecting much of East Africa, which has been hit with a terrible drought. The pre-famine conditions caused by this drought are “driving more than 1,000 people over the border into Kenya and Ethiopia each day.” This is pushing refugee camps in these countries to extend their occupancy well beyond their intended maximum. As my fellow intern Rebecca pointed out, the Dadaab refugee camp in Kenya is currently operating at more than four times its capacity. Good luck getting an adequate supply of food and water, let alone necessary medical care, when the camp is that full.

According to a UN estimate, 2.8 million people living in Somalia are in need of emergency aid. These already dire conditions have been pushed to the brink by the 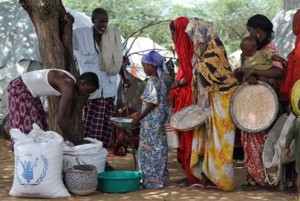 drought, which has wiped out the crops and livestock many Somalis depend on to survive. Even al-Shabaab and their absurd campaign against aid agencies is now seeing that outside help might be needed to help deal with these issues. But I wonder how long such a truce between this Islamist group and non-Muslim aid agencies can last. Evidence suggests that al-Shabaab is far from being a stable group, with a few key leaders continually vying for power over the others. Who is to say that another leader will not simply reverse the decision to allow in aid?

Revoking the right of aid agencies to work in the country once the drought ends would be an awful course of action, but it is unfortunately likely, regardless of who is in charge. I don’t have answers to a lot of the questions related to this issue, so I leave the post open to your suggestions. What is the best way to encourage al-Shabaab, so long as they maintain such a strong influence in the region, to continue to allow aid groups to work there without fear of harassment or extortion?

In spite of these potential problems looming in the future, it is certainly for the best that these organizations are, for the time being, allowed to work in Somalia. For what it’s worth, these are the types of stories that I love to see in the headlines. Though the chances are slim, this may mark the turning point in the plight of Somalis, and that is an encouraging thought.