Opportunity in the Developing World

The Necessity of Training

Towards the end of my second deployment to Iraq, I was offered a rather unique opportunity. Through a hookup from a fellow Arabic linguist, my coworkers and I were allowed to join a police training team for a week or so. The purpose of these teams was to instruct classes of Iraqi soldiers on basic military tactics – land navigation (land nav), patrolling, house clearing, etc. A deployed military translator typically spends most of their time behind the scenes in a dark, secure room. Needless to say, I was stoked for the chance to put down my headphones, get some fresh air and hang out with Iraqi soldiers who barely knew any English.

I didn’t end up providing much instruction (my land nav skills were less than fine tuned) but I did help translate for the Marines who were giving the actual instruction. After the stuffy classroom courses, I spent some time roaming through fields helping the Iraqi soldiers locate waypoints in the land nav practice course. I kept the conversation going while we were wandering around because I wanted to hear their stories and opinions – it was fascinating to hear how these Saddam era intelligence Colonels felt about learning basic military skills from US forces as post-Saddam lieutenants. Everything was in Arabic except when I asked my group of 8 or so trainees what they thought of the current condition of their military. They replied in unison English, “Baaaad.” How disheartening.

By the time that I left Iraq in early 2010, US forces were well on their way to halting combat operations altogether. These days, the 47,000 troops or so that remain in Iraq are there doing something similar to what I did for that small stretch in the fields – training the Iraqi security forces on everything from basic skills to advanced counterinsurgency operations.

Much of what I’ve written over the course of the past two months has focused on how to create a sustainable impact rather than simply offering a temporary solution to a chronic problem. In the case of Iraq, the temporary solution would be to eliminate as many terrorist cells and create as secure of an environment as possible while US forces are still there. A more sustainable solution would be to train the Iraqis on how to perform these tasks themselves.

In this, I believe we have succeeded, at least to a limited extent. The larger operations that have taken place in the last two years have almost always been joint operations of US and Iraqi forces. As the deadline for US withdrawal nears, final evaluations of Iraqi security forces are commonplace. Though at times these evaluations appear to be painting a rosy picture, it’s clear that the Iraqi forces are moving along – they are certainly far better equipped to secure their country than they were five years ago. Obviously, the true test will be what happens when these new forces are completely on their own come 2012. A lot has changed since I wandered the Iraqi training fields. Instead of disparaging when asked about the status of their military, perhaps now those disgruntled lieutenants would merely shrug.

I present my experiences and all this information as a way to frame the discussion on US withdrawal from Afghanistan. Today, President Obama is due to announce his plan on withdrawing troops from last year’s surge. The amount of factors that play into this decision is dizzying and I do not envy the President’s responsibility to make a choice.

Amongst these factors, however, the status of Afghan security forces must be considered one of the most important. Despite the many voices that opposed US presence in Iraq, mine included, most have quieted down as reports of bombings and deaths have diminished. The relatively secure environment of 2011 Iraq is in large part due to this much-improved Iraqi security force I have been talking about. Without this, the US pullout from Iraq would spell a far more volatile future.

The same principle goes for Afghanistan. If the ISAF forces intend on creating a sustainable impact there, they must continue to provide security while police training programs continue to be ramped up. Trainees that find their way into Afghan police 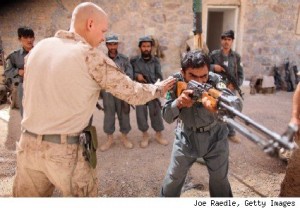 training camps are overwhelmingly illiterate, rendering many conventional training methods useless. As with so many other aspects of the military, training forces must adapt to this reality and find other methods of instruction. In spite of this and myriad other challenges, the training must go on.

Even if President Obama decides to withdraw the surge, he would be wise to follow outgoing Defense Secretary Robert Gate’s recommendation for a slow overall withdrawal. That way, we could leave behind a native security force that would be capable of handling counterinsurgency operations on their own, or at least with minimal support from ISAF forces.

Many mistakes were made in the various iterations of Operation Iraqi Freedom, but one thing we got right was the importance of training and supporting the local population. It is imperative that we do the same in Afghanistan.