Some would scoff at the idea of living with an alternate identity in a virtual world, as in the popular Sims games, or the widely-played “massively-multiplayer online role-playing games” (MMORPG). However, since it was introduced in 2003, the online virtual world called Second Life has completely transformed self-expression. Because of its user-friendliness and a multitude of building options, not only does it allow members to create customized worlds and identities, but the software has been used more and more as an educational tool by academic institutions, a virtual work space to collaborate and conduct training, a gallery to display artwork and creative media, and a means for businesses to market their products.

Interestingly, the virtual space has also become a very useful and innovative way to disseminate health care-related information and create supportive environments for members of the disabled community.  For many persons with disabilities (PWDs) who are physically limited from venturing out of their homes, Second Life provides access to social networks. And for those PWDs who wish to simulate alternative physical 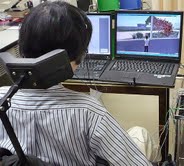 capabilities (even superhuman abilities like flying), Second Life offers a world of liberating and fantastical options.

When I first discovered this trend, I was a little skeptical about its advantages. Instead of allowing PWDs to remain physically isolated, I am usually much more supportive of long-term initiatives that integrate them into “real world” communities, and force policies that will make public life universally accessible. But once I recognized the social, medical, and psychological advantages to having a virtual support group at your fingertips, I was completely won over by the idea.  Virtual spaces are being used by people from all walks of life, and with varying degrees of ability. While many parts of society are still struggling to overcome false impressions of disability, Second Life offers a bias-free environment in which PWDs are treated with the same respect as all other members. For example, due to discrimination in the hiring process, individuals with very serious physical limitations may have trouble securing job positions. But if they have the right skills, they may be able to gain similar work experience and skills via their avatars on Second Life. I certainly don’t think that this is a long-term strategy to challenge cycles of discrimination, since people shouldn’t need to resort to “virtual” (i.e. “able-bodied”) versions of themselves to gain positive recognition. But I do think it offers a temporary, safe environment where individuals can create receptive communities.

Further investigation revealed a crowd of organizations and individuals who are working to provide the optimum virtual experience for individuals with disabilities. By improving accessibility on the site and designing adaptive technology for those who may have trouble using the traditional keyboard, mouse, or touchpad, Second Life becomes available for all users. For example, Virtual Ability, inc. is a non-profit corporation based in Colorado, which evaluates individuals’ skills and offers to adjust hardware and software to make Second Life easily accessible. They also offer training and orientation on how to use Second Life, and how to access “information, encouragement, training, companionship, referrals to other online resources and groups, ways to contribute back to the community, and ways to have fun.”

Alternatively, I came across those who are also developing applications that would simulate disability for non-disabled users. This feature could be either very useful or in very poor taste, depending on its purpose. It shouldn’t be used to trivialize the experience of disability, but rather, as a tool to educate and raise awareness. A positive example is a team that developed an application to teach park and recreation employees about barriers in the park. This feature could be very useful for those who are designing public spaces or assisting and interacting with PWDs on a regular basis. Experiencing the world from the point of view of PWDs is  a hands-on, eye-opening way to have non-disabled individuals wake up to the reality of an inaccessible world.  Felix Kratzer focused on developing exactly such applications that would simulate various types of disability so that non-disabled users can have a sense of what it might be like to have physical limitations. I believe that projects like these, if they are able to reach sizable parts of the mainstream population, could have a positive impact on building sensitivity skills and reaching across social boundaries. Overall, I am pretty impressed by the idea of exploring alternative bodily experiences through virtual worlds, especially when there is potential to built relationships and communal atmospheres among both PWDs and the non-disabled population.

This video is narrated by the founder of the “Heron Sanctuary”, a virtual support community in Second Life, created for members who have disabilities that limit their mobility and access to social groups.