Inside the coal industry, part 2

Coal and the future of energy

In a recent post I commented about the problems that communities in Kentucky face against coal industries and mountain top removal procedures (see here). People concerned about mining’s environmental impact propose a return to “deep mining. Deep mining is not as damaging as mountain top removal, and it also requires more people and therefore means more jobs.

But the willingness of current miners to work with “older” mining methods, such as deep mining, is improbable because of two reasons.  First, deep mining is more risky for miners, if safety conditions are not well enforced. And there is an inherent risk of getting lung problems. It is also an unlikely and unfavorable choice because deep mining would mean a decrease in current wages (as companies are forced to increase employees, they cut wages).

What needs to occur is a demand for more jobs, with safe working conditions and strong wages. But with no miner union or other type of social organizing occurring, there is no strong coalition to demand all of these things simultanously. The mining companies are therefore benefitting from the community’s division, as they create a systematic opposition between the “environment” and the “jobs”.

A possible way out would be to make sure that coal companies are doing their work in both a social and environmentally responsible way. It may mean fewer profits, but there would be more social benefits. And for this to happen, the community has to understand that they do have common goals, there should be an end to fighting on opposite sides of the conversation as either “environment” or “jobs”.

In the current economic context, politicians won’t change the industry’s behavior if there is no alternative proposal. In a recent documentary about Appalachia’s mountain top removal “The last mountain”, they suggest wind energy as an alternative to coal (and Bobby Kennedy Jr. largely supports it). 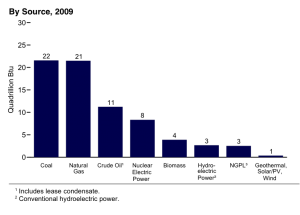 Although it looks like a great solution for the community in Appalachia, it would present a major problem for the rest of America. Wind energy produces less power than coal and it is more difficult to transport the type of  energy that it produces. In that sense, coal companies have another great argument in their favor, as they supply between 1/3 and 1/2 of America’s energy (for more stats go here). If we prohibit coal industry in Appalachia, there won’t be enough power to light up New York, Chicago, Los Angeles, or even Detroit.

What could be another possible solution? Many say: end the coal and oil subsidies and lets promote greener, renewable energies! This does sound ideal, and it should be done. But it will not come without other costs.  The transition to green jobs requires education, training, and  other inputs that need large funding. Cleaner energies are still not as effective as oil or coal, so it is hard to obtain the appropiate funding.

This transition to “cleaner energies” would also represent other sacrifices. While we make the transition, America’s strong energy demand we’ll force us to either: increase energy imports from developing countries (Colombian or Chinese coal,see here for example) or we’ll extract it from other regions of America (Natural Gas of Philadelphia). Extractive industries in developing countries have large records of human rights and environmental abuses; natural gas involves hydrofracking, which has already caused major controversy in places like New York.

This is all without forgetting that renewable energies also have serious environmental impacts. Solar panels need rare earth minerals that are just as difficult to extract and have even more environmental impacts than coal. Wind turbines are not as effective and they are often pretty loud. What should we choose then, as we look for a win-win situation?

Indeed, it seems to be a problem with no easy way out. One thing I learned from the trip, is that being against coal is not as simple as it seems. Many different interests are at stake. People, corporations, and environment are all part of the coal industry’s complicated web, and you cannot neglect any of them. To find solutions, we have to be smart.

Putting everything into the bigger picture, it becomes part of a much wider and broader issue, and it shows that we are all impacted by the industry. Coal affects us all, as producers or consumers, and we should all have a say on what happens next.

We have to think about what is economically feasible as well as what is environmentally sustainable. In my opinion, unless we start changing the way we consume and use energy, these two goals are very unlikely to happen simultaneously. For wind energy to work, efficiency and controled use of current energy are necessary. The “green economy” is more about shifting to a smarter use of energy than to continuing an excessive use of renewable ones.