The case of the eastern Kentucky’s Appalachia Mountains

Last week I was part of a delegation to Kentucky with Witness for Peace (to learn more about the organization click here). Its goal was to learn about coal extraction and its impacts on the communities and the environment of Eastern Kentucky. During the three-day trip, I was able to get a glimpse of the complicated problem involving energy in general and the coal industry in particular.

I left New York City excited and ready to learn. I returned confused and kind of overwhelmed by the complexity of the problem that the community, and all of us, face trying to become a greener, cleaner economy.

I consider myself to be an environmentalist, and I do not support further development of the coal industry. Nevertheless, this delegation helped me become aware of both sides of the story, that of the “tree huggers” as well as of the people who support the 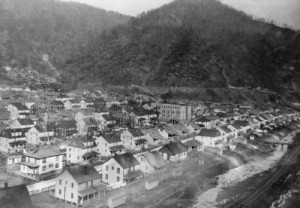 industry. We settled in the dense forest of the Appalachian Mountains, near the charming towns of Lynch and Benham, in Harlam County.

The coal industry has been the only form of economic development in this area. Entire towns of eastern Kentucky were built in the early century for the purpose of providing shelter to the miners. Lynch and Benham are not the exception. Lynch was built by the U.S. Coal & Coke Company (subsidiary of U.S. Steel) in 1917. Back in the days, it was the largest coal camp in the world (see image). For years, the company provided shelter, food, education and health services to the community.

The industry’s presence is still paramount. The coal industry is the main source of employment in the area. It has become a “mono-economy”, based solely on coal. Therefore, it is common to see cars with stickers and license plates that read “friends of coal”. Coal is part of the region’s way of life, pride, and culture.

Nevertheless, the coal community has been having strong opposition from “outsiders” as well as, and most importantly, from people of the region. Because of a recent and fairly modern form of mining, mountain top removal (for more information and illustrations see http://mountainjustice.org/facts/steps.php), the damages to the environment have increased significantly and more and more of people’s homes are being damaged by the extraction. But coal companies have largely benefited from this. Mountain top removal is the cheapest way of extraction and it employs fewer people. They have made incredible profits because of it.

I visited the region and talked to the people that opposed mountain top removal. What the coal industry sees as “environmentalists” is a set of people that are opposed to mountain top removal, due to its serious environmental damages. However, they are not opposed to the coal industry. They understand its importance and see that a transition to a cleaner economy has to be smooth. They propose a return to “deep mining”, the traditional form of mining, or a shift to cleaner energies.

A return to “deep mining” seems difficult if law and stricter environmental regulations do not enforce it. Under the current Clearwater Act, the method is not prohibited. Mountain top removal has to become illegal, and if not, companies won’t have enough incentives to change their method of mining. This is without counting that many current employees may actually oppose deep mining, since it is a more dangerous and health damaging form of mining.

Coal is there for a reason. The coal industry is not blameless, but its existence and actions could be justified. There is a strong demand for coal, not only in America but also all over the world.  If we are to find a solution, we need to be creative and ask important, broader questions. How do we sustain ourselves and how should we do it? How much energy do we really need? Although it is a problem involving coal, the root cause of it is not coal it self.