In my last post I discussed the general global issue of child soldier exploitation.  When child militarism is discussed, the spotlight is usually directed at the experiences of boys.  However, out of the estimated 300,000 children exploited in armed 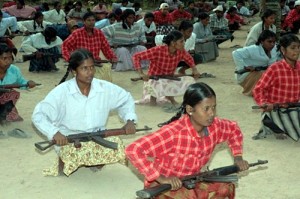 governmental and rebel forces, about 30% are female.  Due to social, cultural, political, and religious factors in various regions of the world, females are especially prone to military recruitment and often face harsher roles and conditions than their male counterparts.  Their service far exceeds the physical fighting we most often hear about, as females are often exposed to gender-based violence and abuse.  Some of the imposed roles female child soldiers face includes:

Female child soldiers are a sub-group that needs specialized attention, particularly in developing effective plans and programs to disarm, demobilize, and reintegrate them back into society.  Girls are exposed to gender-specific conditions and hardships in their military roles such as rape, unwanted/forced pregnancies and marriages, high risk of sexually-transmitted diseases including HIV/AIDS, and other forms of discrimination and human rights violations.  Unfortunately, the very conditions that they experience in the military are the very same vulnerabilities they often face in general society.  Therefore, there is an even greater challenge in rehabilitating and reintegrating female child soldiers back into their communities since they face an overall high level of injustice and devaluation in everyday living.

Reintegration back into society is a major difficulty for female child soldiers due to their general lack of social status.  The social stigmatization and marginalization of girls is rampant in many areas of the world.  Females are often shunned from their families and communities due to the misperception of their sexual experiences as shameful regardless of whether force and coercion was used or not.  Rape and sexual abuse is viewed as disgraceful—for the victims, not perpetrators.  One component of assisting in the rehabilitation and reintegration of female child soldiers lies in educating the societies in which they are returning to.  Communities need to be educated about the basic human rights of all individuals, females included.  Traditional gender roles and expectations need to be challenged; however, respect for cultural practices and beliefs must be respected insofar that they do not break international humanitarian law.  The combined support of international, governmental, and non-profit entities are essential in redefining gender roles, restructuring legislation and policy, reorganizing and recreating rehabilitation/reintegration programs that take gender into account, and empowering the disempowered.  This is not a short-term commitment.

Two of the identified weaknesses of current rehabilitation/reintegration programs for child soldiers include their “Band-aid” interventions and general exclusion of girls from receiving services.  Most of the programs that assist in the disarmament and rehabilitation of child soldiers receive short-term funding of 1-2 years, only addressing immediate needs of the exploited children.  While short-term funding is better than no funding, it is an unsustainable solution.  Children are most likely left with a lack of support and lack of skills to successfully reenter and sustain themselves in society.  It is necessary for funding to be prolonged, allowing for long-term programs to assist these kids in becoming productive members of society and decreasing the likelihood of further exploitation.

The majority of rehabilitation/reintegration programs for child soldiers specifically cater to boys or those who directly fight in war.  Often, they do not consider or assist child soldiers in “support” roles which largely make up the female child soldier population.  Programs must take all military roles of children into account when providing support and resettlement assistance—the effects of both direct and indirect armed conflict roles are traumatic and unsettling.  No child should be discounted due to their service role; therefore, intake criteria must be changed to reflect all children of war.  Current programs need to begin addressing the problems specifically faced by female child soldiers—both on an individual and societal level.  Physical and psychological treatment, educational and vocational training, and social and political empowerment are some key components to effective rehabilitation programs.  By giving these young girls a platform to discuss their experiences and relay significant knowledge/information to the local, governmental, and international communities, they can contribute to the peacebuilding and disarmament process as well as transform societal perceptions of the value of females.