Many of the posts I’ve written thus far have mentioned the recent uprisings and governmental overhauls taking place in the Middle East. These events are bringing incredible amounts of change to archaic systems and have the potential to completely reshape the Arab world, a source of great excitement to people living in the region. To borrow the words of Rashid Khalidi, “Suddenly, to be an Arab has become a good thing.”

Now that the revolutionary dust has begun to settle in Tunisia and Egypt, it’s time to find out exactly what the new leadership has planned. Though some policy decisions have been laid out, there are still many unanswered questions as to what direction these countries are about to head in. One such question is that of educational reform, an issue the leaders of the Arab world cannot afford to neglect. The citizens of Arab nations have already demonstrated that they have no problem causing a tenacious ruckus if their basic needs are not met. The best way to address the protestors’ demands is to strike at the common source of many economic woes: the education system.

What is the status of education in the Arab world? Perhaps the most comprehensive studies are those that have been done by the World Bank, which tracks a number of 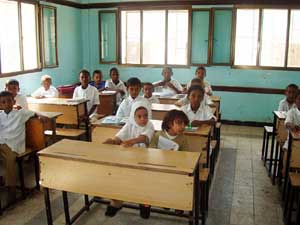 factors that contribute to education, including such basic statistics as average public expenditures on education per country. The reports show that education in the Middle East and North Africa (MENA) region has improved dramatically after a major region-wide developmental push starting in the 1960’s. The greatest achievement, one report states, has been the narrowing of the gender gap. Generally speaking, women of the region have far more access to public education than they did in the middle of the 20th century. A positive step, to be sure.

But the findings of these reports are not all quite as encouraging. MENA countries have some of the lowest education indicators in the entire world. As a consequence of initial reforms, schools became overcrowded. This led to a decline in the quality of overall education as well as a decrease in the amount of scholarships and other public incentives to attend school. This helped set the current status quo for Arab public education, where the goal of the schools is to “turn out minimally skilled bureaucrats who are not even guaranteed government jobs…” But the problem isn’t a simple matter of funding as you may presume, as MENA countries on average dedicate a higher amount of GDP and government expenditures to education than other developing countries of similar economic status.

This begs the question, if it’s not just a matter of increasing funding, what can be done to actually improve the education system of the MENA region? The Word Bank proposes a three level solution. Successful education reform depends on engineering (physical resources, finance), incentives (evaluation/monitoring, rewards) and public accountability (voice at the national and local level). With the ample amount of funding about to stream into Egypt and Tunisia, it seems the engineering portion is largely taken care of. The leaders of these countries must then focus on creating an incentive, ensuring public education is of a high enough quality to create graduates who can stimulate the economy. And the recent demonstrations show that Egypt, Tunisia and plenty of other Arab nations no longer have an issue with public accountability. The reforms should also take into account courses on people comprehension, which help people learn how to build relationships with one another – something people of all regions could benefit from.

Leaders in Tunisia and Egypt would be wise to take advantage of the statistics provided by the World Bank. Although in 2007 both of these countries ranked amongst the highest in the region for successful educational systems, they still have a long way to go considering the low ranking for the overall region. If the leaders want to address issues with the economy, a necessity in keeping their populations happy, they should make sure that their public schools are doing more than cranking out graduate after graduate that has little chance of finding a job.

Khalidi was right; it is a good time to be an Arab. For the first time in decades, many individuals have the chance to live in a country where their leaders provide them with tools, like education, that will enable them to build their own futures. Let’s hope those leaders don’t squander the opportunity to instill reforms that the region desperately needs.