On Tuesday I posted about the history of CEDAW ratification in the United States and some of the arguments made against it, and wrote about how there is a new campaign pushing for it in the US as soon as possible. There are, of course, arguments in both directions for its ratification or not, but what is particularly interesting about this 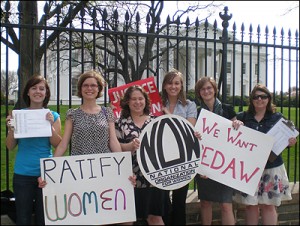 debate is how it is divided into two distinct categories: debates where one side is misinformed or has misinterpreted CEDAW vs. debates where both sides have ideological differences that make them see particular, correctly identified consequences of CEDAW as beneficial or harmful.

For instance, one of the more common arguments one hears against CEDAW is that it called for a ban on Mother’s Day in Belarus. This has been pretty heavily misconstrued. Belarus was recovering from its separation from the USSR, which had forced an end to traditional gender roles. Belarus bounced back from this very hard, reinstating the roles of women as mother’s and caregivers in a big way that was actually extremely discriminatory in its effect. Belarus responded to the criticisms of the CEDAW committee by creating a Mother’s Day, celebrating the traditional roles of women. This, of course, was not what the CEDAW Committee had in mind when it chastised Belarus, and they expressed their disappointment. This was blown up and seen as a call for an end to Mother’s Day by the CEDAW Committee.

On the other hand, subjects like maternity leave have created a lot of friction between US groups for and against CEDAW. Article 11 of CEDAW calls for “maternity leave with pay or with comparable social benefits without loss of former employment, seniority or social allowances.” That, pretty explicitly, obligates ratifiers of CEDAW to have a paid maternity leave system, something the US does not have (although this has been a criticism leveled against the US, especially in the face of the other industrialized countries that have instituted such a system). This, then, is an ideological difference that does not have any remedy in interpretation. One is either for paid maternal leave, or not, and those who aren’t must also be against CEDAW.

If the tone of this article had not made it obvious, I am very much in favor of US ratification of CEDAW. Not only is the US’ record on human rights treaties pretty pathetic, but CEDAW would give advocates for women’s equality another tool to fix many of the inequalities (the pay gap, lack of women’s participation in government, lack of paid maternity leave, since I’m on the “these are problems” side of that debate) that still exist in American society. In the absence of an equal rights amendment guaranteeing equality of the sexes, CEDAW will act as binding treaty that will allow the US to further demonstrate its commitment to the international legal system while also furthering the equality of women and men domestically.

Stephen Thompson is a Program and Research Intern with the SISGI Group’s Research Division working on issues of Peacekeeping, women’s and gender equality, and domestic human rights program implementation. To learn more about the SISGI Group visitwww.sisgigroup.org