Celebrating Earth Day and A Billion Acts of Green

“Hi I am Sal Khan. I am the founder and faculty of the Khan Academy and we are trying to educate the world.” 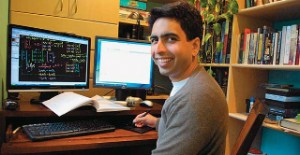 These were the first words I heard Salmaan Khan speak when I watched my first video on the Khan Academy. I was instantly impressed. A single article would never be able to do enough justice to what Khan has accomplished in his life so far. A graduate from MIT and Harvard, Khan had a simple plan that could potentially change the lives of millions of people – Free Online Education.

The idea started when Salmaan was tutoring his nephews. It sky rocketed from there. What is this idea? Khan has put up over 2100 videos on algebra, biology, history, math and a variety of other subjects that students can access from across the globe absolutely free. As of December 2009, Khan’s You Tube-hosted tutorials receive a total of more than 35,000 views per day. All the children need is a computer and an Internet connection. While Khan’s project is still in its initial stages, it already is receiving funding from investors and donors. As of September 2010 Google decided to provide the academy with 2 million dollars to expand its courses and enable the academy to translate their core library into the world’s most widely spoken languages. Khan’s aim is to create the ‘world’s first free, world-class virtual school where anyone can learn anything.’

Such a simple idea can potentially change the way we educate future generations forever. With millions of children not getting an adequate education, a simple computer can solve their problems. In conflict-ridden countries where it is unsafe for children to go to school, or in countries where families are to poor to send their children to school, the Khan Academy would solve the education problem. This is where the country’s government needs to come in. By investing in more computers and technology based education for poor or rural families, children can finally receive an education. Education paves the path to a poverty free society, and a free online education could be the boost a poverty-ridden country needs.