The City of God’s Peace Police

Most people living in a developing country usually welcome a high growth rate. The standard of living improves, unemployment falls down and people are removed from the depths of poverty. But unfortunately, not everyone gets to reap the benefits of a country surging forward. There are always small pockets of people and areas that just do not seem to improve. Brazil’s Cidade de Deus – the City of God – is one of these areas.

The purpose of this post is not to provide you with gaudy details about how people live in their dilapidated favelas, or how drug lords roam the streets with big guns and a threatening stare. That story is a familiar one. Nevertheless, Brazil is not turning a blind eye to this particular area in Rio de Janeiro. Unlike most countries that face problems and conveniently ignore them, Brazil has decided to use a rather unorthodox method of winning back these slums from the wrath of crime and poverty- their domestic police force.

For years, the City of God was one of the city’s most fearsome neighborhoods, so 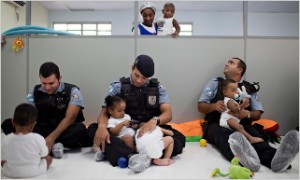 dangerous that even the police refused to enter. But because of the upcoming World Cup in 2014 and Olympic Games in 2016, Brazil was forced to eradicate any security concerns that existed in and around the area. The “peace police” as they are so called, perform their normal job of policing and add a bit of social work to their job. They do not really engage in much of the gun battles that take place between the military police and the drug lords. They devote themselves to winning over the residents who have been exposed to violence in their past. They integrate with the residents, play with the children and protect the neighborhood from the prevailing drug lords. While it is true that the City of God is not what it once was and has vastly improved, many residents still can’t see the 315 police officers as anything but the enemy.

Why do residents not trust the very police who spend hours at orphanages and community centers in their own area?

For years, government officials refused to take responsibility for the slums, and as drug gangs built caches of weapons it became harder for the police to enter without a firefight. Eventually, the people resented the police for abandoning them. But today, not a single resident would doubt the fact that the police have done a good job in maintaining a decent amount of security in the area. While it may be true that drug lords still exist and crime is still practiced on a large scale, no longer do you see gunmen openly walking the streets between favelas, threatening and plundering people.

While all this is a vast improvement to the standard of living in the Cidade de Deus, it must be noted that the government only made an effort when the country was announced to be hosts of the World Cup and the Olympics. Residents of the area may believe that the police will leave them again when these two events are over. It could end up that the drug lords will take over control once again if all of the eyes of the world have turned away. I strongly believe that residents have something to worry about. While the media is publishing images of police officers playing with children, the drug lords are waiting for the level of security to be turned down a couple of notches after the international events conclude. What do you think the governments’ next move will be and what can be done to Cidade de Deus to make it a safe place to live permanently?