Or at least that’s Kate Moss’ take on things. In 2009, Kate Moss was highly criticized for publicizing such a dangerous, and detrimental motto. Mainstream media and bloggers alike slammed her for setting such a poor example when it came to the body image discussion. However, it’s important to realize that she’s not the only one to blame. There are much greater forces than her when it comes to determining the major factors behind the weight loss craze and increase in eating disorders in girls and women.  One major factor comes in the form of women’s beauty magazines.

Cosmopolitan has been the highest selling women’s magazine since 1972. Its monthly paid circulation is 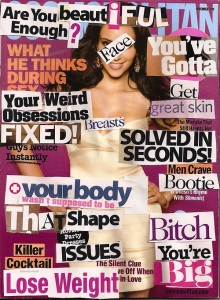 around three million readers, however the numbers are actually much higher than that when it comes to actual readership. When you take into account the amount of women who read the magazine at the hair stylist, while waiting in the doctor’s office, or in the living room of their best friend’s house, the actual number shoots up to around 20 million readers. That’s a whole lot of influence.

The problem is that the prevailing message in Cosmopolitan, like other popular women’s magazines Glamour and Vogue, is that appearances are everything. In fact, around three-quarters of women’s magazines covers are focused simply on how to change one’s appearance. There are articles on dieting, and detoxes, and cosmetic surgery… the list goes on and on. The message is clear- that women are imperfect and are in constant need of improvement. They are bombarded with photo stories filled with images of waif-like models. They constantly see catch phrases like, “How to Lose Those Last Five Pounds!” or “Get the Perfect Bikini Body!” The pursuit is bodily perfection. Studies have shown that women’s magazines have over ten times more advertisements and articles promoting weight loss than their male counterparts.

It would be naive to say that the media directly causes an eating disorder. However, it can be a contributing 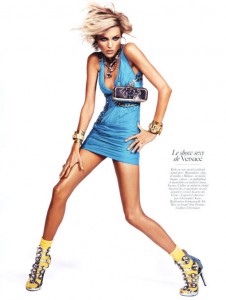 factor. Magazines create unattainable images of female beauty, that many girls and women find impossible to reach. No matter how hard they try, and how much they diet, they cannot become that size 0 or 2 body that they so often see in the pages of the women’s magazines. According to a 2008 article on HealthyPlace.com, “today’s fashion models weigh 23% less than the average female, and a young woman between the ages of 18-34 has a 7% chance of being as slim as a catwalk model and a 1% chance of being as thin as a supermodel”. For young girls and teenagers in particular, such representations are devastating. At a time when their self esteem and confidence is at its most fragile, magazines prey on such insecurities, by presenting impossible standards of beauty. Researchers have found that, “69% of girls in 5th-12th grade reported that magazine pictures influenced their idea of a perfect body shape” and consequently that, ““47% of girls in 5th-12th grade reported wanting to lose weight because of magazine pictures”. That’s where eating disorders come in. The American research group Anorexia Nervosa & Related Eating Disorders found that one out of every four college-aged females has undergone unhealthy ways of losing weight, for example skipping meals, fasting, vomiting, or excessive exercise. And it’s not just college-aged women. Girls as young as elementary school are in danger of being swept away by the “size zero movement” as well. Rates of anorexia and bulimia are on the rise. In every decade since 1930, there has been a rise in the anorexia incidence rates. In addition, 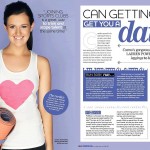 bulimia rates have increased dramatically since 1990.

Some women’s magazines are taking a stand. Germany’s most-read women’s magazine Brigette has decided to ban professional models from its pages, replaced by “real women” due to ongoing reader complaints. In many parts of the world, female readers are growing tired of comparing themselves to stick-thin models, who weigh significantly less than the average woman. They are ready for a new standard of beauty, one that is relatable and healthy-looking.

In a society with an ever-increasing obesity problem, staying healthy should be a main topic of discussion. Fitness should be encouraged. However, one should vow to work out and eat healthier simply in order to become a healthier person, not to compete with the images of models that they are bombarded with in the print media. Magazines should follow the lead of the German magazine Brigette and begin to use “real” people amongst their pages, not just stick-thin body types. Women’s magazines need to widen their scope when it comes to models, and ensure that all types of people are shown in the pages of the beauty magazines, regardless of their pant size.