One of the issues that I’ve become increasingly interested in has been the inaccessibility to water and the privatization of water.  The last couple of weeks, I have been following the World Water Council and the World Water Forum, which were established in order to address some of these issues.  Overall, I have found that the dialogue to such issues is extremely important.  Yet, as I have mentioned before, there seems to be too much talk and not enough action.  In my last post, I mentioned that one of the structural initiatives governments needed to implement is institutions that would directly oversee the sanitation departments in their local regions.  I 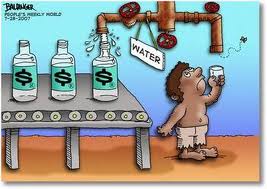 First, I do believe that institutions serve as an appropriate management system where laws can be overseen and implemented, given the right political environment.  However, I don’t believe that this means privatizing water around the world.  A couple of years ago was the first time I had ever come across this concept of making a public good into a commodity.  When I say public, it is to demonstrate that water can be a non-rivalrous and non-excludable good when provided by governments, such as clean air and national defense.  But it is exactly this that is the problem: governments are not providing this essential “good” to people.  Because government inefficiency in the public water sector has been dire to many people across the globe, some governments have decided to privatize water, making water a private good: a good that can be excludable and rivalrous.  This means that people would be able to exercise private property rights, preventing those people who have not paid for the good from obtaining it or benefiting from it.  Private goods also emphasize their existence for means of profit. 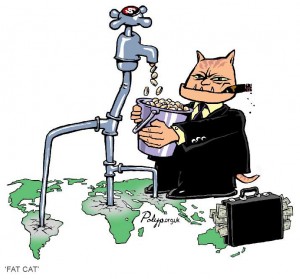 pushed by The World Bank and the International Development Bank as a requirement for the Bolivian government to retain its ongoing state loans.  This can also be in the “Lima Rehabilitation and Management Project” of Peru that was approved by The World Bank.  This was a 150 million dollar loan given in order to modernize SEDAPAL (Servicio de Agua Potable y Alcantarillado), the water supply and sanitation of Lima and Callao.  The results of these water privatizations, however have not demonstrated to be efficient or to reduce the world’s water issues.  Water tariffs increased by 200-300 percent in Cochabamba after the privatization of water of SEMAPA, Cochabamba’s water system, increasing the burden of the already poor Bolivians.  Similarly in Peru, from 1980 to 1996, residential water rose from $0.17 per cubic meter to $0.41 per cubic meter which is more than double!  These rates also have to be compared to the amount of money the average citizens earn, which is less than $2 a day for more than 40% of the population in Peru.

From the perspective of the private water companies, water privatization is embraced because of its profits.  But 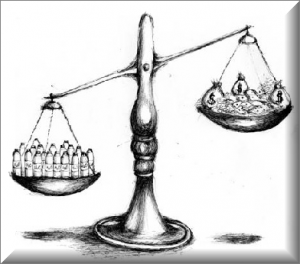 looking at the people that remain in poverty and are unable to sustain themselves because of the lack of potable water, water privatization has not demonstrated to be a sustainable solution for our world’s water problem.  Weighing the two against each other, we find a struggle between profits and the right to water.  Which one wins depends on the political state of each country and their agenda.  The institutions that are established will follow the result between these two struggles.  How can you as individuals promote what you believe should be the outcome?